In an incident which has grim echoes to Samsung’s Galaxy Note 7 disaster, a man’s Reliance Lyf handset apparently exploded and then burst into flames. This is the most recent instance of one of the company’s phones blasting open.

Tanvir Sadiq, who works as the Political Secretary to the Working President of the Jammu and Kashmir National Conference, tweeted about the occurrence on November 6. He posted 3 photos alongside a caption which asserted that his family had a narrow escape after his Reliance Lyf handset blew up.

Sadiq also told Reliance in separate tweets that the matter was serious and should be looked into without delay. He believes all such phones should be recalled immediately. He further advised people with Lyf handsets to be very cautious and careful.

Reliance Lyf responded to the posts with a tweet of its own, apologizing for the explosion and promising to look into the matter. It later told the Economic Times in a statement that it was concerned about the incident and is currently assessing the cause. It plans to take appropriate action based on its findings. 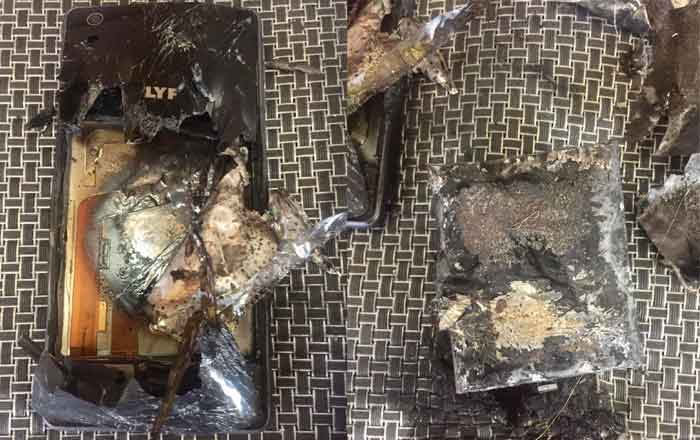 A previous case involving a exploding Reliance Water 1 came to light back in September this year. The phone in question supposedly exploded in the owner’s hands while he was browsing Facebook. He purportedly had to get medical treatment for his hands as a result of the blast.

Reliance will have to tread carefully if it wants to prevent a Galaxy Note 7-scale catastrophe on its hands. It might have to take drastic action and recall units if incidents like this keep popping up.