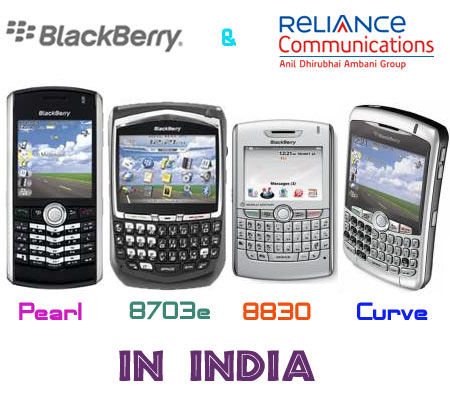 Reliance Communications (RCOM) and Research In Motion (RIM) have teamed up to announce the availability of the BlackBerry wireless platform on a CDMA network in India.

RCOM has introduced the BlackBerry 8830 World Edition smartphone, which enables interoperability between the CDMA and GSM network to improve the productivity of enterprises and professional whilst they are on-the-move.

According to RCOM, India for the very first time will see an array of solutions for enterprises and professionals including Internet-based online trading. All this is thanls to the new BlackBerry.

Prakash Bajpai, President, RCOM, said “As the first player to offer BlackBerry World Edition smartphone in India, we are confident that our network will offer a superior value proposition to professionals on the move. Reliance is committed to provide world class Solutions on BlackBerry Enterprise server and we will take BlackBerry ‘BeyondEmail’. Now for the first time in India we are launching BlackBerry service with applications such as Internet-based online trading and Blackberry on prepaid. Many more such solutions will follow suit.”

In addition, the device will allow a number of other features through Reliance, such as Bloomberg anywhere services, Reliance mobile world access to 23 fun applications, video streaming on BlackBerry, prepaid on BlackBerry for the first time in India, BlackBerry Enterprise Server for enterprise, and BlackBerry Internet Service for SME and professional.

Furthermore, the RCOM’s CDMA-powered BlackBerry smartphones make it possible for professionals and entrepreneurs to access their business critical data, including PowerPoint presentations, multimedia files, graphs, etc. With the CDMA technology, users can download their mails and surf the net at faster speeds.

The other significant features of the BlackBerry 8830 device are:

The BlackBerry models introduced in the country are:

Available across 10,000 towns and 3 lakh villages, this will make it the most widely connected BlackBerry service in India. Initially, the BlackBerry 8830 and 8703e devices will be available across 16 Indian cities and will eventually be expanded to other cities in phase II. RCOM has announced the BlackBerry Pearl and BlackBerry Curve on its GSM network in a phase-wise manner beginning with Indore.