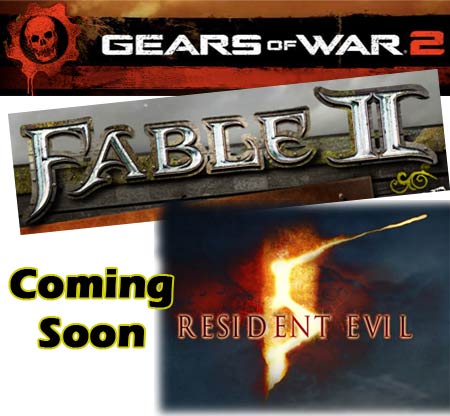 E3 2008 has begun and gaming companies are finally revealing more details about their upcoming games. At the Microsoft’s press conference at E3 the details regarding Gears of War 2, Resident Evil 5 and Fable 2 emerged.

Capcom disclosed that Resident Evil 5 will have a simultaneous worldwide release on March 13, 2009. The game will be released for Xbox 360 as well as PlayStation 3 console. The game will feature a new co-operative mode.

While, Lionhead Studios announced that the Fable 2 has been finished and is all set to be launched in October 2008. The Fable 2 game will be exclusively available on Xbox 360 console.

The most awaited third-person sci-fi shooter game, Gears of War 2 is scheduled to hit the shelves on November 7, 2008, which earlier than anticipated. The game is developed by Epic games and will be published by Microsoft exclusively for its 360 console.