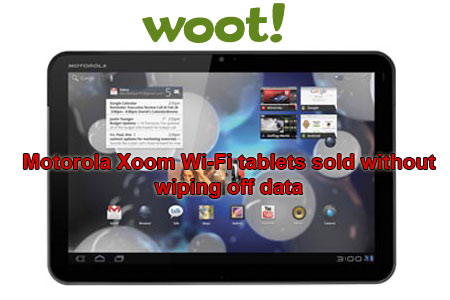 In a recent announcement by Motorola Mobility, it comes to light that nearly 100 from a batch of 6,200 refurbished Motorola Xoom Wi-Fi tablets may have been resold by Woot.com with sensitive data from previous owners. These tablets were resold between the months of October and December 2011. And the fact that they were not cleared of such content before resale does come as a bit of a surprise.

Obviously, users who may not have performed a factory reset on their refurbished Motorola Xoom Wi-Fi tablets before returning them to the company should be a worried bunch. After all, there is the risk of having sensitive information like stored usernames and passwords for email and SNS along with access to other applications out in the open. Besides of course, the danger of their private photographs, documents and whatever else they chose to store on the tablet being exposed too.

According to Motorola, “Customers who purchased and then returned a Motorola Xoom Wi-Fi tablet to Amazon.com, Best Buy, BJ’s Wholesale, eBay, Office Max, Radio Shack, Sam’s Club, or Staples and a few other independent retailers between March and October 2011 a complimentary two-year membership of Experian’s ProtectMyID Alert to mitigate any risks is being offered. Original owners are advised to contact Experian at 1-866-926-9803 to sign up for the credit monitoring service.”

To take the edge off any threat faced, original owners are advised to change their email and SNS passwords. Apologizing for the mistake, Motorola goes on to confirm that refurbished units sold beyond the October-December time period aren’t affected.

In the mean time, the company is encouraging users to return the refurbished Motorola Xoom Wi-Fi tablets so that their memory can be cleared. Those who may have acquired the tablets in the aforementioned period can visit motorola.com/xoomreturn or call customer support to know more.