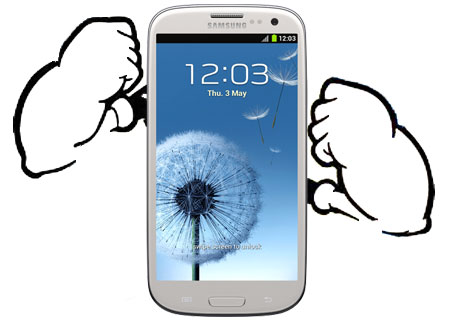 A refreshed version of the Samsung Galaxy S3 is inbound it seems, and will apparently come with a battery of larger capacity. In addition, that talk is that it should also be capable of wireless charging. Another aspect rumored to get the bump up is the display, although little has been revealed at this point and it is not known exactly what screen advancements will be present. It should be noted, however, that the company recently purchased a stake in Sharp, which could contribute to the sharing of screen technology.

The Galaxy S3 has already received a trimmed down version in the form of the S3 mini, an NFC variant of which was seen towards the end of January this year for the UK. Now, as Unwired View is reporting, the latest rumor about an S3 refresh comes by way of Russian journalist Eldar Murtazin, who revealed the aforementioned tidbits via his Twitter account.

The South Korean manufacturer hasn’t shied away from giving the phones in its S line a bit of a revamp. It has done this with the first in the series, bringing out the S Plus and the S Advance. And who can forget the S2 Plus, which, oddly, was downgraded in terms of the internal memory it tucked away? It seems that this, if it turns out to be true, is an extension of the same philosophy, and not that much unlike Apple’s own. The Cupertino-based company has redone versions of the iPhone under its belt – the 4S for example, and now the speculated 5S.

Wireless charging was made popular quite a while after the GS3 was originally launched, and it seems old Sammy wants to hop aboard a ship that hasn’t quite set sail yet. That is to say that this functionality hasn’t yet caught on quite as much as the company’s Galaxy range. A device in this line can be found in practically every mobile segment around. And the company keeps inventing segments into which to shove its products.

In exact specifications (according to the gossip), the refreshed version should house a 2,400mAh battery, which is 300mAh more than the existing model, if and when we do see a Samsung Galaxy S3 Plus (if that is indeed what it will be called).