Red’s holographic Hydrogen One gets shown off on camera

Red’s mysterious Hydrogen One smartphone made waves last month when the professional camera maker claimed that it would feature a holographic display. Concrete details in the form of photos and specs weren’t released at the time, leading many to wonder whether the handset was real or just a flight of fancy.

Red is now trying to dispel this notion by teaming up with popular YouTuber Marques Brownlee. The latter got his hands on 3 prototypes showing off different aspects of the Hydrogen One. The first is actually a dummy unit without any working parts inside, but serves as a representation of what the final design will be.

The Hydrogen One has a pretty unique look and is probably going to find favor among people who like their phones to look super rugged, complete with grooves on the side to keep a firm grip. Brownlee compared it to both the iPhone 7 Plus and OnePlus 5, and it’s clearly bigger than the two. 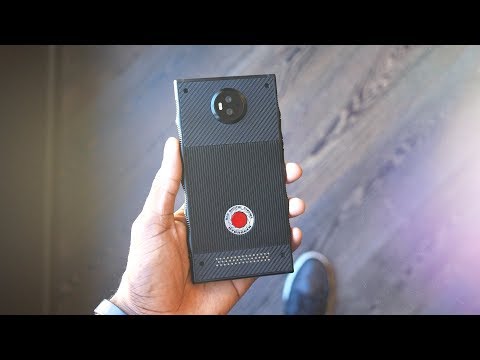 Based on the first prototype, Red is going to endow its device with a dedicated video recording button, stereo speakers up front, dual rear cameras, a 3.5mm headphone jack, and a power button that also serves as a fingerprint scanner. As for the second unit, it shows off the much-touted holographic display.

Sadly, we don’t actually get to see the panel in action. Only Brownlee’s reaction to it is shown to the camera, with the Hydrogen One itself blurred out in his hands. He seemed pretty impressed, talking about how the screen creates a “crazy, deep, sort of 3D look” which wasn’t completely perfect since there was some bleeding at the edges and stutters in the motion.

He was apparently shown both 4D and 2D content, with the second converted for the holographic display. The third prototype turned out to be a Hydrogen mod with its own sensor and lens. All-in-all, the entire video is something of a tease, but it might be enough to tempt people into pre-ordering the phone.