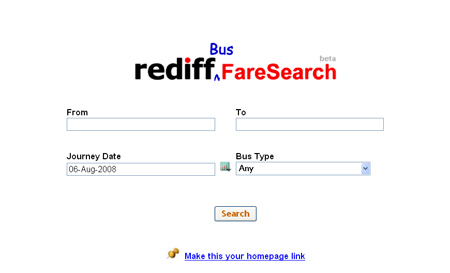 Rediff had previously announced its Rail and Air Fare search facility. Now, the popular Indian portal has announced the launch of Bus FareSearch service. The new service will allow users to search for buses plying between states. Users can also get their schedules pick up points, check availability and book seats for over 1000 destinations in India by using the new service.

Not only the bus fares, but the Rediff Bus FareSearch also allows users to get comparative view of the trains available for the chosen destination. Moreover, users can select the type of the bus as per their convenience including A/C, Non A/C, and seating or sleeper class.

In addition, the service enables users to book bus tickets either through travel agents, whose list is available on the site or through partner sites.