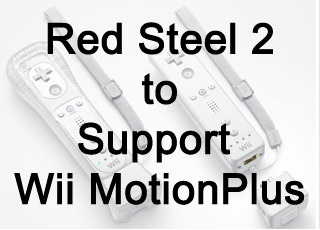 As soon as Nintendo announced the MotionPlus accessory for Wii, the race begun for game developers to develop the games based on the upcoming accessory. Being one of them Ubisoft is said to be working on Red Steel 2.

The first version of the Red Steel game was launched on November 19, 2006. The first person shooter game is said to be one of the popular games developed for Wii. It appeared in top ten of Wii chart for several months.

As of now no information regarding the gameplay of Red Steel 2 has been made available. However, Wii gamers would eagerly be waiting for the anticipated game.

Whilst Ubisoft’s other two games, Shaun White and Rayman 3 are on their way to market. Both the Wii games are expected to be available by end of this year.