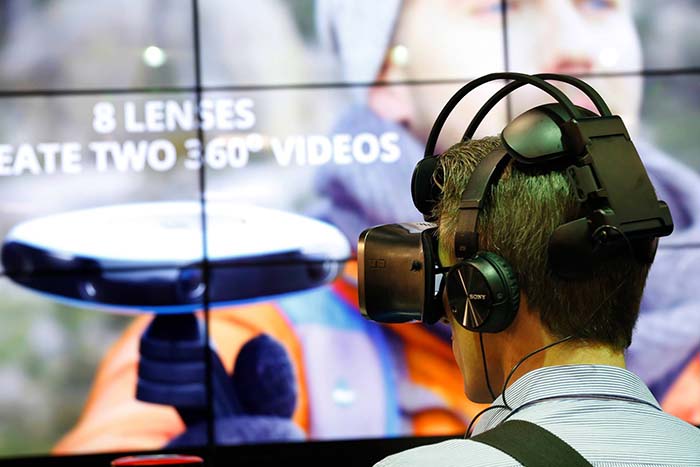 You know the physical reality that you’re experiencing right now? It’s great and all, but it tends to get a bit boring. A much better option would be if you could shoot lasers out of your hands, fly, or have a tiger for a pet, right? Of course it would, and the good news is that these physical fantasies can be converted into digital realities with the magic of computer generated imagery.

Digital reality comes in two distinct flavors: augmented reality, or AR, and virtual reality, or VR. You’ll often see these terms used together, so it’s understandable if the difference between them isn’t entirely clear. In fact, the difference is merely one of gradation – both AR and VR use the same fundamental concept of tricking your physical senses into perceiving a new reality.

The three floors of reality

Let’s consider reality as a building with three floors. On the ground floor, we have physical reality – everything you’re now experiencing (through your five senses of taste, touch, smell, sight, and hearing) exactly defines your physical reality. Philosophical questions aside, we humans can more or less agree on our physical reality. Put two people in the same room at the same time, and they’ll be able to give the same basic description of their environment and what sort of things took place in it.

Now let’s move up to the second floor of reality: augmented reality. As its name suggests, AR takes our physical reality and gives it something more, enhancing (augmenting) it with CGI. This is achieved by means of a screen and camera, as can be found on any tablet or smartphone. Point the camera at the environment you’re in, and an AR program can insert a digital image into the scene and show it on screen. The key feature of AR is that it will take the environment into account – walk around the room or tilt your camera, and the perspective of the digital image will shift just as it would if it were really there. If this concept sounds familiar, you may have played the mobile AR phenomenon Pokémon Go last summer.

Now we’re ready to visit the top floor of our building: virtual reality. VR builds upon the core idea of AR – specifically, altering the physical reality with simulated imagery – but it takes this idea to its natural conclusion. Instead of augmenting physical reality like AR, VR does away with physical reality altogether. This is accomplished with an immersive head-mounted display (HMD) that fills your entire field of view with a simulated reality, placing you in a world that’s entirely removed from your physical surroundings. The effectiveness of VR is incredible – you truly feel as if you’re in another place, even if it’s a place where you can shoot lasers out of your hands. It’s definitely an experience that needs to actually be experienced to fully comprehend.

Actually, that’s the wrong question to ask. As we’ve seen, AR and VR are both just different ways of altering our perception of reality, and they happen to be complementary. Neither is better or worse; they just have different (but overlapping) use cases.

AR, for instance, is well-suited to mobile applications like the aforementioned Pokémon Go. Although there are some high-end AR headsets, like the Microsoft HoloLens, AR doesn’t require an HMD. That means AR can be used pretty much anywhere you bring your phone (which, of course, is everywhere). Thus, AR can help you navigate to your car in a parking lot, show you what that couch would look like in your living room, give you a guided tour of the Louvre, walk you through how to assemble that new desk from Ikea, or any other application that would benefit from visual assistance.

In contrast, VR is ideal for truly immersive experiences. It’s a great medium for gaming – search up a reaction video of people playing a VR horror game to see just how real it can seem. VR is also ideal for simulations, like flight or surgery simulators, to train professionals in the most real possible setting short of real life. VR also opens up new possibilities in storytelling, with VR films capable of literally placing you in a digital Hogwarts or Jurassic Park. VR even has applications in healthcare, such as treating people suffering from PTSD.

The taste of digital reality

AR and VR build upon and replace our physical reality with those built by our computers. AR and VR unbind us from the real world and reveal the exciting frontier of digital reality. And no matter what flavor of digital reality you taste – AR or VR – you’ll notice this: the taste is mighty sweet.