The thin line of price that distinguishes laptops from tablets is fast blurring, and RDP Thin Book is a result of that. Priced at just Rs 10000, it is competing against the cheap Chromebooks from companies like Xolo which are sold at similar prices. But it has a few things that they don’t – it runs Windows 10 and grabs a big 14.1-inch display. In contrast, the cheap Chromebooks run the Internet-friendly Chrome OS and feature 11-inch displays. With RDP being a relatively fresh name, does the Thin Book really stand the test of everyday use or is it just a really cheap inferior laptop looking to grab your attention with its low price tag? Let’s find out! 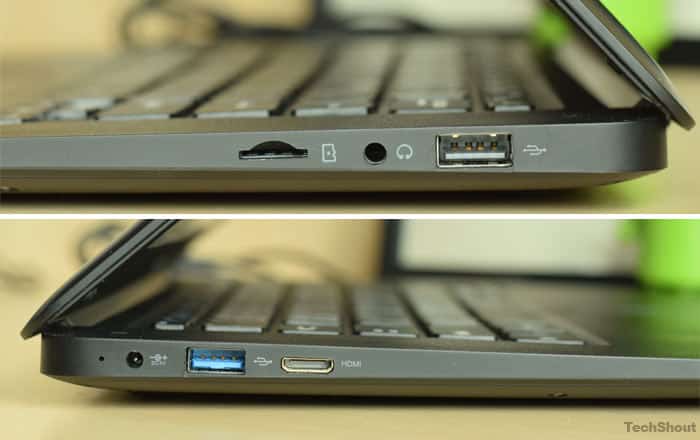 The thin and light RDP Thin Book’s display sports a resolution of 1366 x 768 pixels on its 14.1-inch estate. Inside it, you’ll find a 1.84GHz Intel Atom quad core X5-Z8300 processor coupled with 2GB of RAM, which is not expandable. And of course, with the Intel chipset, you get integrated Intel HD graphics. There’s also a 10000mAh battery inside it, which sounds promising. The storage is limited to just 32GB and there’s a microSD card slot offering 128GB of additional space. Which brings us to the ports on this laptop. On one side, you have a headphone or speaker jack, a microSD card slot and a USB 2 port. And on the other side, there’s a power input for the charger, a micro HDMI port and… a USB 3 port. Now that’s a pleasant surprise. 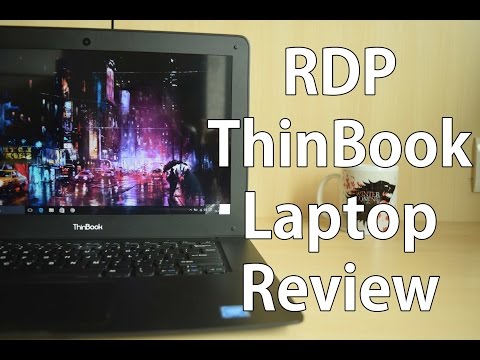 The RDP Thin Book boasts of a thin and light profile, and this adds a lot to its overall appeal. Despite its big screen, it’s pretty easy to carry around thanks to its 1.5kg weight and 20mm thickness. The plastic material on its body is quite smooth to the touch on the top, where it’s also a bit wonky, but the bottom end has a much more grippy and sturdy surface. Due to its light weight, the Thin Book cannot be opened with one hand. Plus it wobbles a good deal each time it’s opened. The unit we received strangely had a plastic coating on the display which could not be removed because it was sealed. Due to this, we could never see the time or the date on the desktop, plus there was some irremovable lettering on the other side as well. We tried contacting RDP to confirm whether this will be present on all models or is it just a one-off issue, but we haven’t heard back from the company as yet. 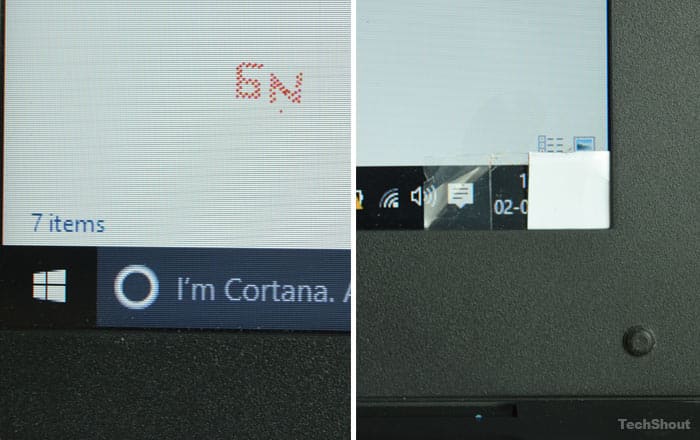 Moving on, you get a VGA webcam along with this laptop, apart from two microphones, which make for satisfactory video calling experiences. A great little perk is that the laptop offers a noticeably large trackpad. And the keyboard; although it has well cushioned keys, is not helped by the unstable surface. RDP’s Thin Book has dual speakers which oddly enough, deliver audio from the bottom rather than the top. A bit of an oddball is that the orientation of both the USB slots is downward rather than upward, but you shouldn’t take time to get used to this. To give you a lowdown, the design of the RDP Thin Book looks good to the eye, but the many compromises quickly become visible when you start using it. You’ll have to handle it with extreme care to make it last for a long time.

Like we said before, the fact that a 14.1-inch display is available on a Rs 10000 laptop itself is a big deal. And the 1366 x 768 pixel resolution on this LCD panel is satisfactory to say the least. It can’t get as bright as you might want it to be in outdoor environments, but it’s great for indoor use. As for the viewing angles, they can best be called admirable. In terms of sharpness too, it’s not anywhere near great. 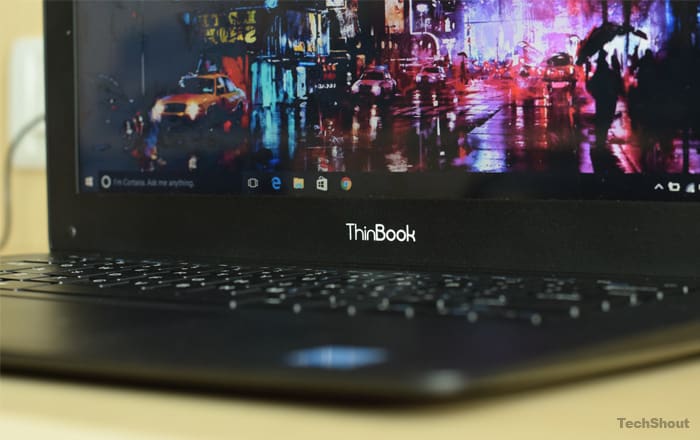 Well, the speakers on RDP Thin Book are really, really bad. They sound incredibly muffled, and have a very low volume. Even at maximum volume, we were struggling to listen to the dialogues in movies. Connecting your headphones or external speakers to its audio jack is the only way you can satisfactorily watch videos or listen to music on it.

Now you have to understand that being an extremely cheap laptop, the RDP Thin Book is not capable of handling heavy games or applications. It’s primarily built for those who just need a laptop for using the Internet and watching movies on the go. For these two tasks, it delivers quite a pleasing performance. Browsing with multiple tabs open was never an issue. We even tried running Minecraft on this machine, and were surprised by how quick it was to start. The game ran smoothly all throughout without any hiccups. Typing on the keyboard as well as using the trackpad wasn’t an issue, and the latter does support scrolling gestures. 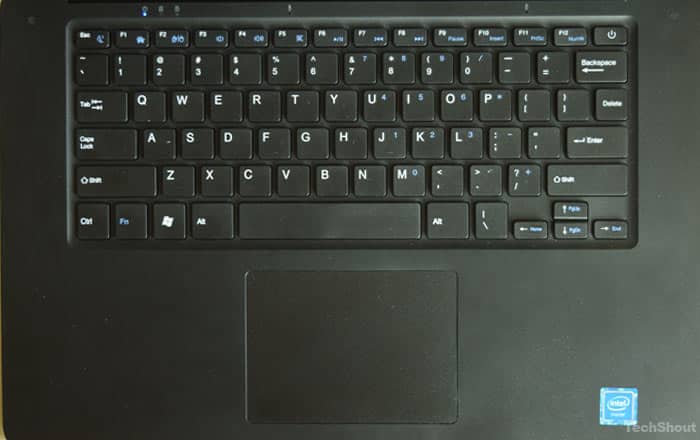 The RDP Thin Book comes preinstalled with a 32-bit Home version of Windows 10, which is something that helps it gain a big advantage over the cheap Chromebooks. You are getting all the basic functionalities of the OS including Cortana support. There’s even a DOS version of the laptop which can be bought at Rs 9000. 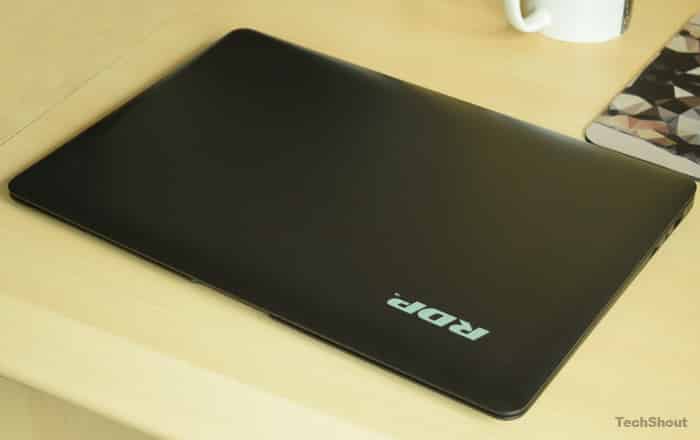 Speaking of benchmarks, on SunSpider, it managed to grab a score of 939ms, while its BaseMark score reached 73.35. Now these benchmarks can by no means be called impressive, but the Thin Book is anyway not trying to impress you with its power. The copying speeds are decent, and the USB 3.0 port is great for those with compatible hard disks or flash drives. And now for the battery life. The 10000mAh battery of the Thin Book is claimed to offer 8.5 hours of usage by its makers. Our unit could never achieve that number, but we did manage to extract about 4.5 hours of heavy web browsing time from it with the screen brightness set to max. The bottom line is, this laptop’s low-grade internals are nothing to worry about if you require it for basic tasks like web browsing, streaming movies or using Microsoft Office.

– Good overall performance for a laptop so cheap.

– Large-sized display as compared to other similarly priced laptops.

The main point of concern here is whether the RDP Thin Book should be preferred over the similarly priced Chromebooks or not? The answer will be a yes if you’re a Windows fan, but do take note that the body and the overall construction of this laptop is very poor and it’s not something that will last you long. And the customer service was unresponsive when we tried contacting it. But for being a cheap yet well performing Windows 10 notebook with a 14-inch display, we’re giving it 3 out of 5 stars.