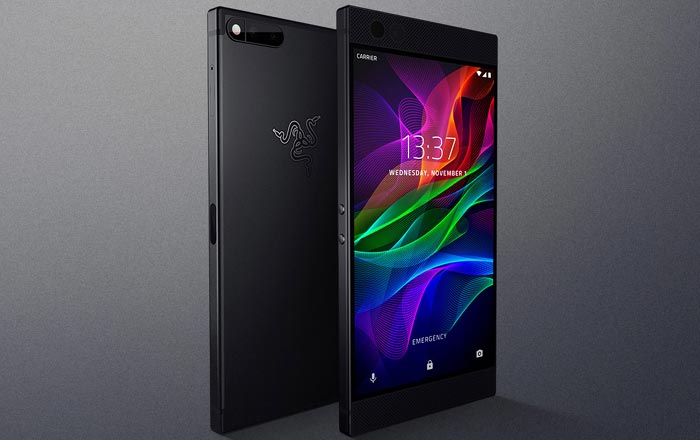 Razer’s officially in the smartphone business, with the tech major dropping its first-ever smartphone into the world. As expected from a company known for its gaming prowess, the handset aims directly for gamers using a mix of top-notch specs and Nexbit’s design sensibilities.

One of the key highlights of the Razer Phone is its 5.7-inch IGZO LCD Wide Color Gamut 1440 x 2560p screen which has been enhanced with a 120Hz refresh rate. Its UltraMotion technology is supposed to ensure that there aren’t any stutters or lags in visuals. It’s something the device has in common with Apple’s iPad Pro series which also features the same 120Hz refresh rate.

Sadly, Razer’s decided to get rid of the 3.5mm headphone jack. It’s making up for the loss with Dolby ATMOS-fueled dual front-firing speakers, 24-bit DAC, dual amplifiers, and a THX-certified audio dongle. Under the hood, users will find a Snapdragon 835 processor ticking away. The SoC works alongside an impressive 8GB of RAM and dedicated Game Booster option to make games run smoothly.

All this gaming requires a powerful battery backup, here provided by a fairly large 4000mAh unit. The Razer Phone is supposed to conserve energy through a thermal design that produced less throttling to fully maximize the handset’s power and performance.

Specifications of the Razer Phone:

The Razer Phone will go up for sale on the brand’s site and Amazon on November 17 priced at $699 in the US. Pre-orders kick off on November 3. It’ll also be sold via Microsoft stores in the US and Canada and Three in the UK.