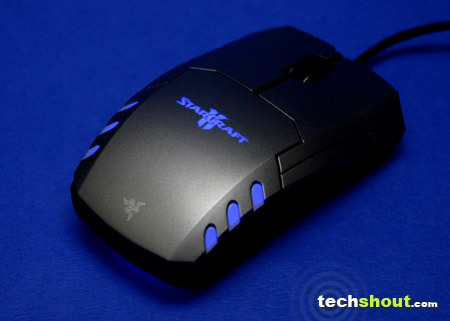 First they ignore you, then they laugh at you, then they fight you, then they join you. It’s a bit funny, but that’s the sort of reaction at least a handful of people who swear by Razer can probably claim to have vaguely identified with at some point or the other. Even though hardcore players may know that fancy lights and pretty peripherals can’t make or fake a good gamer, someone carrying hardware from this company to LAN parties aren’t referred to as the ‘that dude with the flashy mouse/keyboard/headphones’ anymore. We have the Razer Spectre Starcraft II mouse at our review table right now and it seems to be connecting with us quite well. 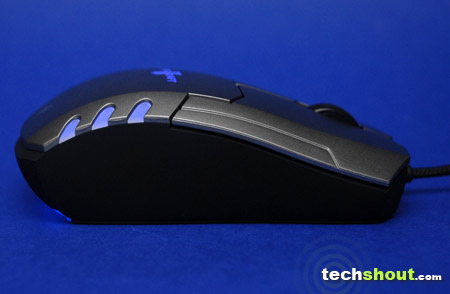 Wait, the warm and cozy connection we felt is only the integrated LED lighting heating our palms gently. The Razer Spectre Starcraft II has been in our clutches for the entire day and contrary to logical or illogical reasoning, it hasn’t become hot enough to explode as yet. A gold-plated USB connector and seven foot braided cord ensure that the device does not get estranged from the CPU. The Christmas lights on this one come in the form of the Starcraft II logo and three short slants of LEDs guarding either side. There’s also a strip of light at the base where the top panel and underbelly meet. Speaking of the latter, turning over the Spectre shows off its 5,600 DPI laser sensor and force adjustment switch. Apart from the left-and right-click buttons and scroll wheel, two others also sit along the top left edge of the chassis. 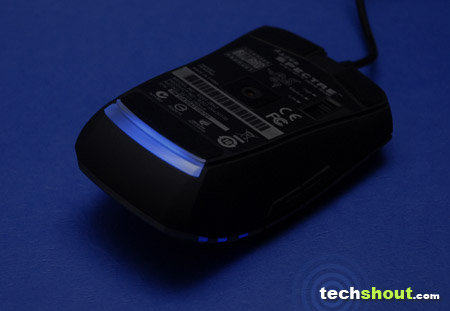 This five-button mouse is noticeably light when propped up besides other mice from the same quarters like the Naga, DeathAdder, Imperator, Abyss and so on. The color palette is black for the base and rubber-like sides, while everything visible on the top, except for the scroll wheel, is silver grey plastic. Surprisingly, you won’t be able to convince the company logo on the lower front end to glow. Ultraslick Teflon feet permit the mouse to be moved without the tiniest squeak of complaint and the amount of energy you expend on clicks is totally up to you. We like it. We’re not the sort of folks to give our fingers too much exercise, so we pick ‘low’ instead of ‘high’ or ‘medium’ on the force adjustment switch mentioned a heartbeat ago. Admittedly, the clicks feel a bit cheap either because of the plastic or how much the buttons seem to dip. Getting the LEDs to glow in a shade complementing the overall design helps the cause. 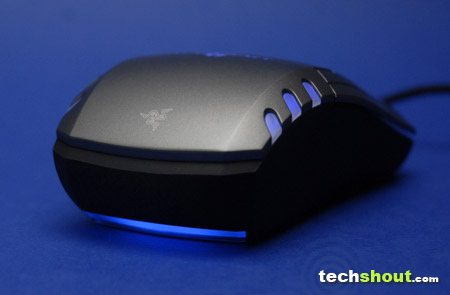 There are still those gamers who turn their noses up at fancy-looking peripherals. Razer has a few tricks up their sleeves for this cohort. The Spectre works very hard at pleasing the customization fiend. It covers the shallower attributes like switching the LED lights on/off or changing the colors to adjusting things like polling rate, DPI and so on and so forth. The driver will need to be downloaded from the support page on the company’s official website from the downloads section. It has a special corner for everything designed under the Starcraft II label. These cover the Marauder keyboard and Banshee headset too and the software for altering all three devices’ settings is packed into one driver bundle. The utility’s user interface is fairly simple to figure out and there are three icons on the top right side which zip us to the Razer support, user manual or exits the application depending on which one is hit. 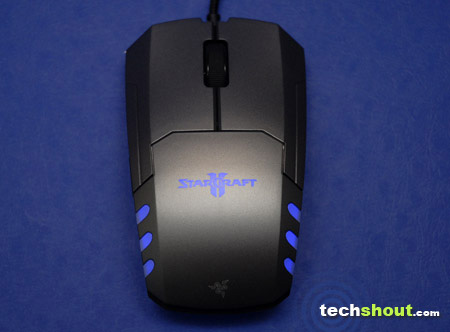 As for the exact number of customizable aspects, we could list them down for you. But we’ll make shorter work of typing it out or reading it by saying – everything. Polling rate. Check. DPI. Check. Acceleration. Check. Colored lights. Check. Button Assignments. Check. You can get up to 5,600 on the DPI meter and even allot different sensitivity levels to vertical and horizontal movements. Another interesting attribute is the mouse’s ability to track APM though this one facet, just like polling rate, presents many hours of enjoyable debate to the gaming community. As for the DPI, notch it up to anything higher than 2,000 and we don’t know of many games which will allow you to play with so little control over your movements. There’s also a slight issue with the cursor which jumps a bit to the lower right side of the screen each time you raise the mouse to reposition it. One thing we’ve learned while using the device is to never underestimate the power of the button assignment functionality. Set the two buttons on the left edge to tweak sensitivity on the fly and you’re good to go.

The customization choices sell the Razer Spectre Starcraft II mouse hard. It manages to convince us that we’re totally in control of the situation whether shooting down opponents in Quake or simply hurling Angry Birds at the green pigs.

For people who are not into big mice or those weighing perceptibly heavier than a regular one from Razer, the lightweight build and smaller size should be welcome attributes.

The cursor has the tendency to jump slightly to the right each time the mouse is lifted and repositioned. When the sensitivity is set to a high level, we’re looking at even bigger, uncontrollable leaps. Tell a gamer that can be overlooked and see the reaction on his face.

The Razer Spectre Starcraft II mouse will have you forking out Rs. 4,999 for it. It’s splendid in terms of personalization and permits a nice fit for the various virtual shoes we step into while gaming. And that’s a good lesson on how useful elements such as adjustable DPI or independent X-Y sensitivity can be. The mouse burns points when it comes to the industrial-style design leaning ever so faintly towards unattractive with the silver gray plastic touch. It’s getting an 8.9 out of 10 rating from us.