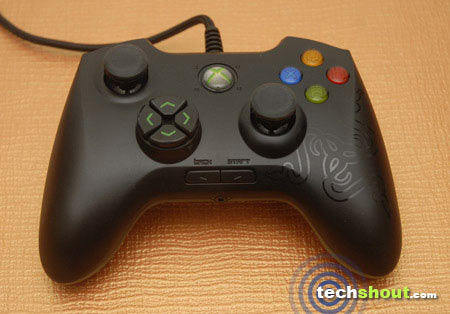 Although we never heard an official reply from Microsoft’s end, Razer went around the town elaborating on how the Razer Onza Tournament Edition controller was designed to alter the gaming experiences on the Xbox 360. For the uninitiated, when Razer announced its plans to enter the console peripheral market, it whipped up a storm in September last year by sending an open letter to Microsoft. Challenging the gaming giant on its very own turf, the manufacturer elucidated significant features and the construct of the then upcoming Razer Onza controller for Xbox 360. So, we’ve got the controller for a review to see how it performs in this contest. Bundled with a quick start guide, Certificate of Authenticity, regulatory compliance information booklet and two Razer logo stickers, the TE device appears too tempting to dodge.

Enclosed in a matte black shell, the Razer Onza Tournament Edition dons a distinctive and stylish attitude which instantaneously reminds you of Razer. The compact construction of the Onza has been clad in a non-slip rubberized finish which boasts of simple detailing. Compared to the first-party gaming solution, this device is far more agile even as it extends equal sturdiness and dynamism. The right side of the upper panel has been embossed with a black-colored Razer logo that stands out against the dark backdrop of the case. The texture of this enclosure extends a comfortable grip, enabling gamers to play for longer hours. So even when our palms were drenched in sweat, it was possible to stay alert through intense moments without the need of constantly wiping them. The Onza scores a significant point as it sports no battery slot at the rear like the original periphery while the flat surface adds to the comfortable grip. 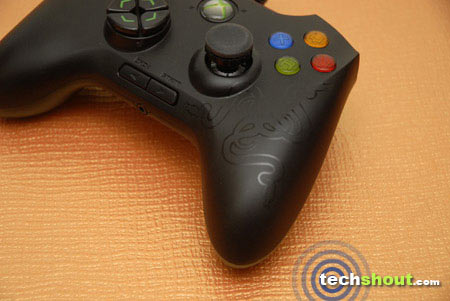 The upper panel has been embedded with left and right analog sticks, an innovatively designed D-pad, LED backlit action keys as well as back and start buttons. As opposed to the original controller, it has been entrenched with the start and back buttons at the lower bottom of the upper panel. The D-pad too has undergone transformation to reflect Razer’s slick attitude with an unusual design. The Xbox Guide button remains intact at the center of the controller while the bumper keys on the left and right shoulders are accompanied by two Multi-Function Buttons. The shape of the outfitted triggers on the Onza resembles those on Mamba pistols whereas there’s also a 2.5mm headset jack and two remap buttons. These integrations are essentially new when compared to the first-party device and we’ll tell you more about them a little later. Furthermore, a 15-foot braided cable has been housed into the space between these shoulders, ensuring that gamers don’t face issues while accessing its varied controls. However, the cable turned out to be far too long than we’d assumed and it can create a problem. The fact that we’ve been quite accustomed to the first-party controller’s wireless nature, this lengthy cable was a bit difficult to manage.

Although the device has been marketed as a Microsoft Xbox 360 controller, it can also be employed with a Windows PC for playing compatible games. Bringing the Onza into play is as simple as plugging the cord into a USB port of either systems. Following this procedure, seamlessly enter highway races, football grounds, boxing rings and other avenues. As mentioned above, one of the first impressive facets of the Onza is the comfortable grip rendered by its rubberized texture. The adjustable nature of the device comes next as the embedded multifarious options make way for superior customization. To start with, the tension analog sticks allow gamers to tighten or loosen the same. Whether fighting Hulk Hogan in THQ’s WWE All Stars or chasing opponents at furious speeds across Need for Speed Most Wanted alleys, you can choose the flexibility and swiftness required for changing angles and movements of in-game characters as per your convenience. This is essentially significant for traversing through tighter realms and performing under intense conditions. 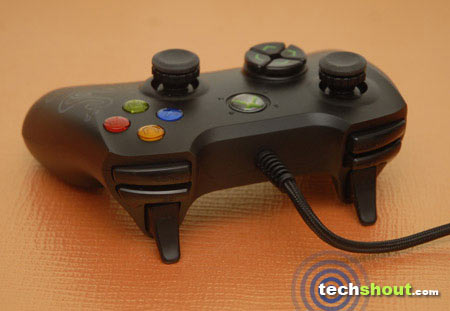 Adding another leaf into the customization portfolio of the controller are the aforesaid remap buttons located on the rear. What these buttons do is that they present you with enough suppleness to assign tasks to the included Multi-Function keys. So if you need to focus on flying and simultaneously destroying enemy aircrafts through Tom Clancy’s H.A.W.X. 2, it is possible to allocate the MFBs with one of the repetitively employed functions. Simply press the right/left Remap button and configure the key by presenting it with the desired function. Once you release the Remap button, the MFB will act as a supplementary key for the same function. Easy to use and extremely expedient, this assimilation manages to give the Razer Onza Tournament Edition an edge over the first-party controller.

The Razer Onza Tournament Edition earns some more brownie points for the LED-backed action buttons. It’s not just the bright illumination of these keys but also the sensitivity delivered by them which works in their favor. The accessibility and sensitivity factors stay true for all keys on the peripheral, churning out a gratifying performance for gamers. While we were engaged in combat zone set out by brawlers such as Marvel Vs Capcom 3: Fate of Two Worlds and WWE All Stars, attacks appeared to flow naturally. In the strategic flight simulator namely Tom Clancy’s H.A.W.X. 2, the crisp and swiftness customization came to our rescue as we tried planning strategies on the fly. However, the D-pad was a little unwieldy to manage. Owing to the fact that the architecture of the D-Pad has changed dramatically, this experience was somewhat anticipated. Nevertheless, it fell short even as it attempted to impress us through crucial moments of our race in the Need for Speed World. 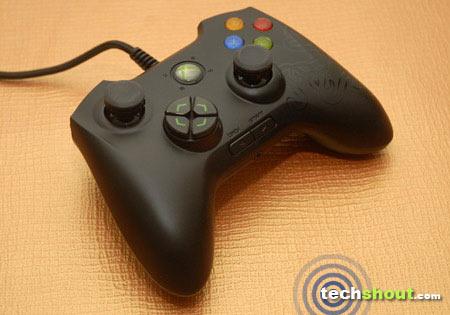 Efficient and smooth, the Onza Tournament Edition has an upper hand over the first party controller, thanks to its agility, robustness and effective controls.

The adjustable analog sticks render comfort with superior customization as the included MFB and trigger keys don an impressive garb.

The 15-foot braided cable can be a problem, especially for gamers accustomed to play with wireless devices.

The unusual design and jagged behavior of the D-pad does not meet expectations and makes it difficult to perform swift commands.

The Razer Onza Tournament Edition controller for Xbox 360 has been sculpted to serve as an alternative to the first-party device. Its robust built and advanced features offer an enriching treat as the device’s slick controls could give the original periphery a run for its money. The device’s comfortable grip and embedded buttons add to its performance but the D-pad is a little disappointing. Enveloped with a price tag of Rs. 3,499, the device appears to be a good option since it functions efficiently without much trouble. The Razer Onza has bagged a score of 8.5 on a rating scale of 10 for its smooth and effective feat.