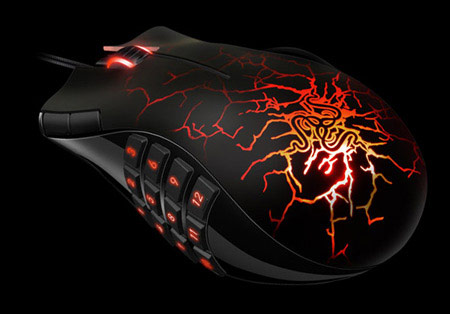 Imagine if you were to enter a battlefield so quiet that it would deafen your fighting skills or carrying a blunt weapon on a crusade across turbulent waves. The emergence of the new gaming era has called for varied products which mould not just the way a title reaches its audience but also shapes the essence of an experience. Every time such an idea pops up, Razer has to mark its attendance with an innovation for fueling the blaze. Following the success of massively multiplayer online games like World of Warcraft, the company sculpted the Razer Naga Molten Special Edition mouse which now commands an exclusive space in our workspace. Sternly overlooking our activities for the past couple of weeks, this MMO-optimized mouse has been our companion through familiar and non-familiar mystical worlds. Here is a review narrating the performance delivered by the Naga Molten Special Edition mouse through these environments.

Offering a worldly parallel to genuine communities, massively multiplayer online games have carved out a different universe within the gaming sphere. As these blazing glories and fiery strategies surged to a higher level with the ascending popularity of MMO titles, Razer announced the Naga Molten and Maelstorm Special Edition mice for equipping gamers with powerful weapons. As we dived into such worlds with the former, many of its subtleties which have been neatly packed in its attractive architecture emerged on the surface. First of all, the Naga Molten SE has something more unique to it than just the fact that the product is tailored on the lines of a specific genre. Draped in a pitch black hue, it sports a raw and impetuous look while sleekly balancing the company’s crave for style and attitude.

Well, if the word ‘nerve-cracking’ was to be manifested in a pictorial form, we doubt it could come into sight more appropriately than this. The first thing about the device that catches your attention is this fissure emanating lava-like design. The authenticity of the architecture has been enhanced with the integrated lightning system which bleeds red. Imprinted on a matte black surface, this construction spurts the ruptured design out of the customary Razer logo. While the magma erupting crevices appear on the backside of this surface, the frontal portion is occupied by a scroll wheel, the left- and right-click buttons and two keys placed in a horizontal position on the extreme left hand side.

The ergonomic structure of the Razer Naga Molten Special Edition mouse elevates to let you place the palm tightly around it as the sides complement the posture of your hand. The right panel of the device protrudes into a bulging figure, enabling you to comfortably place your ring finger on it. The left thumb side boasts of slender curve embedded with 12 customizable buttons, making up for 17 keys in total. The sidepad on the left panel sports 12 numerical buttons arranged in a three row pattern. The rear of the mouse is yet another chapter from Razer’s life and comes outfitted with Ultraslick feet, built-in 3.5G laser sensor and a number lock mechanism. The latter can be employed for locking these side-buttons, facilitating advanced number configuration for users. 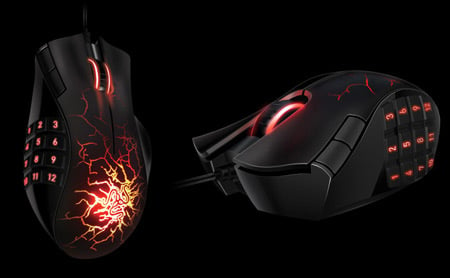 This high-octane piece of art was shipped into our premises with a master guide, a product catalog and a pair of Razer logo stickers. After we were done admiring the Razer Naga Molten Special Edition, it was time the mouse showed us what it has to offer. Once the peripheral’s gold-plated USB port is plugged into the computing system, the process of downloading and setting up Driver Installer seems easy and simple. This procedure unlocks your door to Razer’s digital ‘mystical’ software which lets you adjust numerous capabilities of the mouse for a personalized experience. Whether it is a non MMO game of CounterStrike or a march against the Phobos in Quake III, you can fine-tune the device’s fundamental movements by adjusting the dpi. In this case, the company has packed the offering with a 5600 dpi punch which means that the quirky personality of your Dragon Age: Origins’ Human Noble or Dalish Elf avatar is supplemented with a vigorous boost.

Elucidating about the customization options available, this dossier consists of five major sections namely assign buttons, tweak performance, manage profiles, manage macros and lightning. Assign buttons hold seeds of the mouse’s customization, allowing gamers to allocate varied functions to each of the embedded buttons. Like the Lachesis which paid us a visit a couple of months ago, this offering too extends on-the-fly sensitivity attribute. This feature makes it possible for players to hasten or drop off the pace of their movements without continuously visiting the Naga Configurator.

If you wish to ensure a seamless ride across the universe of Warhammer Online: Age of Reckoning or Mytheon, creating specific profiles by assigning tasks is uncomplicated and simple. Gamers can design separate profile for the Realm versus Realm combat system in the former or casting stones to destroy larger than life gods across the land of Mytheon. It is also easy to turn the illumination emanated by the mouse on and off but there is no way you can change the color of the lava as per your whims.

The mouse’s MMO-based capabilities are refined and crisp. However, it is of little help while your drive across the Need for Speed World circuits. Nevertheless, the mouse’s functions can be modified to encompass the abilities of keyboard into the product. It also facilitates players to traverse with a focused approach through the in-game world. Further, the innovation’s seven-foot braided cable makes it easier to skate across the mat while its numerous controls almost, if not completely, take away any thought of the keyboard. The movements have also been silken with the Ultraslick feet that ensure picture perfect slide and precision. 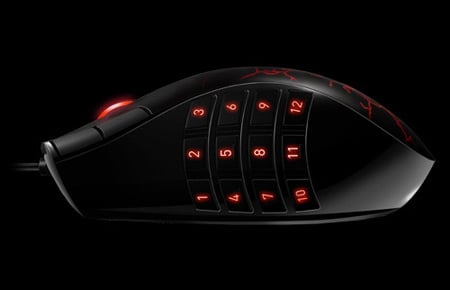 Razer has surpassed itself not only on the gaming front with this solution but also on the non-gaming aspect. Since we found ourselves with some spare time in-between MMORPG takes (pun intended), a non-gaming itinerary was charted out for the mouse. While we edited Photoshop images and surfed through the vivid web world, the Naga exceeded our expectations with its lucid movements and uncomplicated behavior. Smoothly surfing across the mat, the Razer Naga Molten Special Edition ensures a seamless sail through Adobe’s image editing software as well as the gamut of browsers, search engines and social networking sites. The numerical plate pasted on the left side of the mouse extends some help. It is quite possible that you’ll find your thumb clicking them at several points in time.

The sturdy nature of the Razer Naga Molten Special Edition mouse has been enveloped with its fierce appearance, serving a classic blend weaved by its artistic beauty and robust performance. To add to this, the company has devised a distinct mechanism for rendering a dynamic experience. Well, it barely takes a few minutes for the mouse’s temperature to rise above the normal room temperature and it continues to maintain the same even after hours of usage. Probably, the fissure emanating lava-styled design works its way to retain the feel of the natural hazard embodied into the architecture. Besides, the innovation could appear a bit bulky as you initiate into an adventure with it. However, its smooth navigation and customizable nature pervade through the mind at a swift pace to undermine the massive structure as blistering action and supersonic races rush onto the computer screen.

We liked the effervescent fizz of style, attitude and performance compiled into the device. It allows you to flaunt not only your honed skills on MMO and MMORPG battlegrounds but also a spruced up product.

Its impressive performance and compact structure, unfurling a range of customization options build up a remarkable feat.

The customization feature of the mouse is to the tee. It is extremely helpful, allowing users to tweak its abilities as per varying activities.

The device’s depth of field is a bit narrow, especially when its MMO-optimized nature is of little help outside and sometime even within the genre.

The heavy and bulky structure of the mouse could make users a little uncomfortable.

On the product page of this device, Razer states that the Naga Molten Special Edition mouse gives you the Imba. What they mean is that the product presents you with an upper hand over others through the MMO universe. Does the offering actually manage to offer this unfair advantage? Well, it does. Its specifically inclined nature perfectly blends with the genre it has been sculpted for. Besides, its controls can be adapted to varying in-game worlds and they’ve barely let us down. However, the mouse’s construction and nature have been streamlined within a narrow periphery. The device behaves like any other peripheral beyond the MMO periphery and at times, even within the sphere. Furthermore, its Rs. 4,999 price tag could seem a bit too heavy on pockets. Gauging its performance on the whole, we’ve marked it at 8.5 on a rating scale of 10.