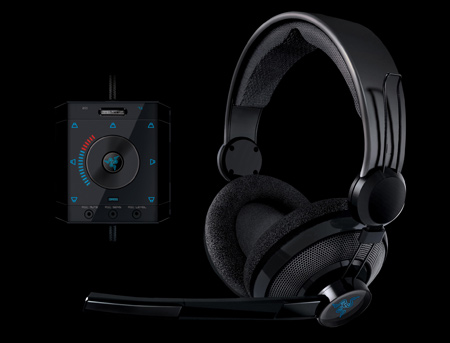 Today we traverse away from keyboards, mice and mats and take a closer look at the Razer Megalodon 7.1 gaming headphones which were delivered to us for a review. No drivers, clutter or fuss to worry about, just you and your headphone striding onto the virtual battlefield. Razer products never cease to amaze us, may it be through their packaging, presentation, overall appearances or even that familiar eerie blue glow. We had, in the past explored just what various Razer mice such as the Mamba, DeathAdder, Abyssus and Imperator had to offer us. We also intricately dived into the Razer Lycosa keyboard and Vespula gaming mouse mat only to emerge with a thumbs up and a positive verdict to pronounce.

When we talk about Razer, two words come to mind, Exquisite Presentation. We have seen this aspect time and again in our reviews based on other products from the company. Hence we weren’t surprised when we received the Razer Megalodon headphones box and a bulky one at that. We however didn’t think a simple pair of headphones would come in a huge package but then again what do you expect from a product christened as Megalodon. On ripping the outer box, we were greeted with the words ‘Put Sound in its Place’ and knew just what we were getting into.

The box opened up like a laptop and sitting plush was not the headphones as we expected but a roundish cloth carrying case with the Razer logo embedded on the surface. This was one great way to strike fear into the heart of other opponents while striding into tournament rooms wielding the bag which has a sinister aura about it. Unzipping the chassis, we spotted the dark colored headphones just waiting to be grabbed and worn. On the inner side of the lid were all the necessary pamphlets such as Quick Start Guide, Certificate of Authenticity, Master Guide and Razer stickers. There were no CDs or anything extra to ply over, just the headset.

The Razer Megalodon seemed to appear like any other gaming headset but on closer inspection, we realized that the device included a plastic meshing on the outer surface of the ear cups. Smart thinking on the part of the Razer guys, if a steel meshing was used instead, it would have certainly made the headphones heavier. Either side of the cups were splashed with the Razer logo which, as suspected emitted a shiny blue light while the company’s name ran along the top of the adjustable band with the underside sporting spongy foam. The ear cushions were tailored out of smooth velvet that could be mounted and dismounted with ease when desired. Players feeling that velvet may not be the way to go can always opt for leatherette or cloth replacement ear cushions which can be purchased separately. On the left side of the headphone was the amplifying and noise-filtering microphone which had a 270 degree swivel ability with the middle part of the mic also completely bendable for further convenience. The frequency response of the headphones and microphone are noted to be 20 – 20,000Hz and 50 – 16,000Hz respectively.

Now that the headphone is dealt with, we move to the other vital parts of the Razer offering. Like the Imperator mouse, this product too sports a 3.3 meters braided fiber sheath cloth cable that seems to be something plucked right out of a sci-fi movie. At the other end is a gold-plated USB connector which sits neatly in the front or rear of the CPU. The headphones can be used immediately when plugged into the computer without the hassle of installing any separate drivers. The PC screen will then feature a pop up bubble with the words ‘your new hardware is installed and ready to use’ and rightly so can head straight to the good stuff. The highlight of the Megalodon is the Razer Maelstrom Audio Engine. This is a nifty little square apparatus which comes along with a sturdy base to avoid moving while players are caught up in the heat of the battle. 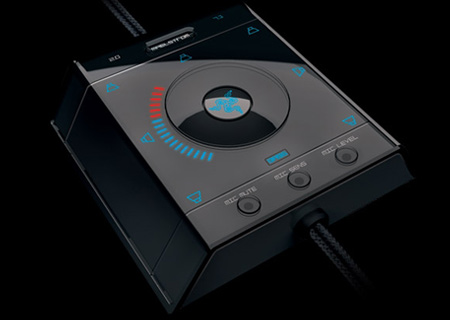 We shall first dive into the various buttons strewn across the square pad. The engine can be activated through the Maelstrom button located at the top of the device. Through the control wheel sitting in the middle, we could easily adjust the volume level by simply moving a finger around the dial. The different speakers can be toggled through a single press of the channel selector which bears the Razer logo. At the bottom, we see three neatly placed buttons namely mic mute, mic sens and mic level for adjusting the various mic options such as mute, sensitivity and volume level. On the top of the engine besides the Maelstrom button are the 2.0 stereo and 7.1 surround sound indicators for music and gaming respectively that light up when selected.

Littered all around the device are indicators for the center, front, side and rear speakers. Just above the mic option buttons is the bass level indicator. On the left-hand side of the volume level dial was the volume indicator which was mostly blue with only the last few lines red in color depending on what level the user chooses. This pretty much covers all the functionalities of the Razer Maelstrom Audio Engine. A noteworthy factor is that the various speakers can be adjusted individually so that each one sports their own desired levels. Although completely drenched in a black hue, the various indicators emit that same eerie blue light for providing that stylish edge while gaming. The only downside here is that the square device gets heated up pretty quickly.

Like with all other Razer products we reviewed in the past, Razer Megalodon too was put through the acid test with the famous Counter-Strike game. Through the headset’s 7.1 channel surround sound we could accurately hear just which direction the enemy was encroaching from. Although the headphone suits this particular game, all titles may not match up to your expectations. Many of them don’t even support 7.1 channel surround sound. For this purpose however you can toggle to the 2.0 channel sound but perhaps won’t get the same desired effect.

When using the Razer Megalodon headphones, you need not detach your speakers from the CPU. You can simply attach the device right into the USB slot and enjoy uninterrupted gaming. Besides playing games, we could also listen to music which was emitted in clear sound through the computer.

Lightweight and comfortable are the key words to describe this Razer offering.

The Megalodon headphone comes without any additional drivers and boasts of easy plug-and–play.

No additional clutter is observed on the cord or headset.

We found this headphone a bit on the expensive side.

Although the company does offer leatherette and cloth replacements, the headphones should have come packed with these two offerings for the price quoted.

The headband could have been more adjustable as it may not fit all types of players.

Staying true to its name, the Razer Megalodon is certainly humongous in its features and will surely take up a huge slice of your gaming life, providing you comfort all the way. The headphones are compatible with Windows XP, x64, Vista, Vista64 and Windows 7 systems. We give this Razer audio product an 8.9 out of 10. Now step into the battlefield armed with just this trendy gaming headphone and your guts.

Packed with its lightweight headset, neat cord and Razer Maelstrom Audio Engine, the offering can be picked up for $149.99.