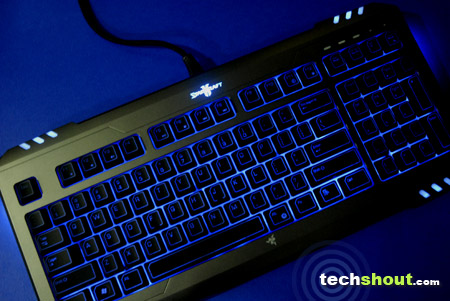 Think Marauder and there’s instantly a picture of a blood-thirsty predator on the hunt for some booty. But when someone like Razer finds it fit enough as a name for their latest peripheral, you know there’s much more to the term than just that. It’s precisely the Razer Marauder StarCraft II gaming keyboard in for a review at our quarters that’s holding our attention. The keyboard is one among the three assortments Razer’s fashioned exclusively for the StarCraft II: Wings of Liberty game, the Razer Sceptre mouse and the Banshee headset being the other two. While the device has been tailored to give gamers that added advantage in StarCraft’s real-time strategy game, it should also pack in a punch for other games in general. So did we ‘Blow our enemies off the battlefield’ with this armor of mass destruction? Well, read on to know. 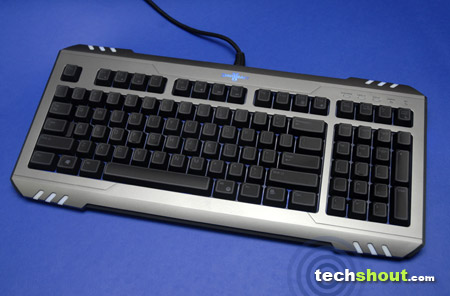 Razer ensures that this licensed Blizzard Entertainment product appears different right from the word go. The company does away with the familiar green and black packaging we’ve come to associate with it to wrap the keyboard in an attractive blue-black box combination synonymous with the StarCraft series. But is the keyboard drool-worthy? Well, it’s a tricky question. The box showed us a black device in a rugged profile and when we did have it our hands, a steel grey chassis that really did nothing to titillate those senses was what we were looking at. The exterior nevertheless emanates the StarCraft presence all along. With the keyboard adopting a rectangular structure, it’s set apart by distinct protrusions. On the rear side, the hardware has been fitted with a 7-foot long braided cable diverging into two gold-plated USB plugs. 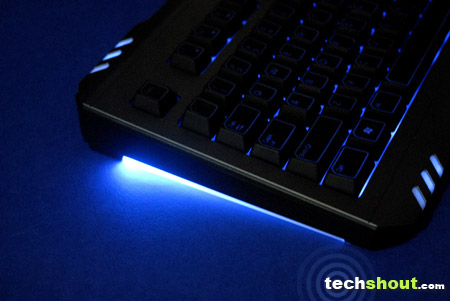 Now what else do we have in the box? A quick start guide, Razer stickers, the main manual, and a master guide. It takes a simple plug-in of one of the USB cables to get the Razer Marauder Starcraft II keyboard hooked up to our PC while the other USB powered up the device for some pleasing backlighting goodness. In fact the only key that seemed to be a little downbeat and if we must say ‘lonely’ on this front, was ‘Esc’. When in dark environs, the laser-etched keys ensure the backlight is showing through. A look around and we notice there are lighting strips on the side bottom of the keyboard too. Even in brightly lit environments, the illumination stands out. Turn the device over and there are standard risers that should help incline it should the need arise and rubber pads that did a pretty good job at making it non-slippery. 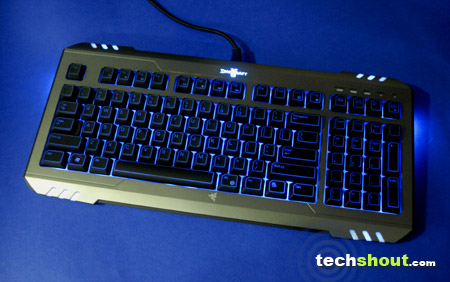 Condensing keyboards! Never really one of the easiest jobs around, you’re going to find some people who love the end design and some who well will scream ‘Why is that key there?’ But at the end of it, it all comes down to making the hardware more utilitarian. And Razer for one appears to have done pretty much the best of what they could. The Marauder has been visibly chopped and is more compact with the Insert, Home, PgUp, Del, End and PgDn buttons all integrated right into the number pad. The placement of the other keys, specifically the Fn key felt so natural, we could wager on all other keyboards probably taking a lesson or two. The aforementioned key was located rather conveniently and made it all that simpler to combine it with other keys for much-needed functionality. Not that we weren’t already prepared, but yes, it is primarily a gaming keyboard and hence not having great tactile feedback will have most non-gamers worried.

You can’t ignore the optimized travel distance and the good spacing in between the slightly elevated keys despite their not-so-good feel though. We’re presuming the key depression to actually suit RTS games perfectly. With a 1000Hz Ultrapolling rate to back it, the responsiveness is definitely a notch above. And our personal favorite, on-the-fly macro recording function to put it simply, makes recording macros feel as easy as A, B, C. It actually took us by surprise how much the need for software programming is kept at bay. Something to watch out for in the Razer Marauder Starcraft II keyboard is the included APM functionality too. While you’re going to spend a lot of time playing around with a whole range of lighting schemes, it also means the speed at which you’re going to be issuing commands through the device. Of course, higher your APM, the more efficient you are.

Responsiveness – that’s one nice word to really describe what the Razer Marauder Starcraft II keyboard is all about.

Of course, the way Razer’s waxing eloquent about all the colors you get to show off and quite literally with the Marauder we give it a thumbs up. 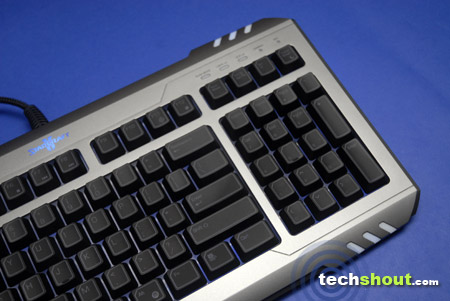 The styling is no doubt in keeping with the StarCraft brand, but really Razer? Does it have to look so plain?

The fact that the Marauder eats up an additional USB port just to gain power may not go down well with everyone.

When it comes down to it, gaming and precisely swift movements is what this StarCraft edition keyboard assures of. Hardcore SC players in particular are surely going to enjoy their time with the device. And though it doesn’t look super-sleek, it does achieve the appearance it was trying to. The fact that it’s more of efficient than anything else has us rooting for it. With StarCraft II: Wings of Liberty being one of the finest RTS games we’ve seen in recent times, buying a customized product only makes that much more sense. But, as all things good, the Razer Marauder StarCraft II is in the relatively higher price range at Rs. 7,499. We’re marking it at 8.5 out of 10.