Razer Mamba Review: Where The Prey Becomes The Predator 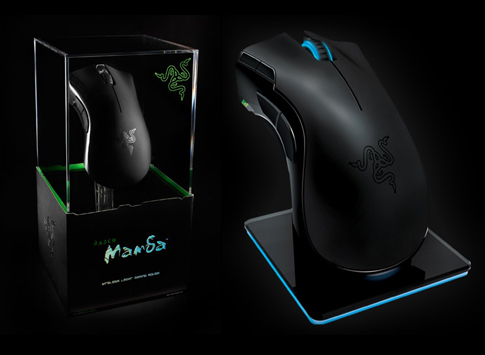 They say the first impression is a lasting one and we certainly saw this saying come alive in the case of the Razer Mamba which suffered our review. You know how we mentioned earlier that Razer’s gaming peripherals are an ideal addition to any gamer’s PC? Well, the Razer Mamba takes the cake in that aspect. It looked so good sitting plush in its display box that we didn’t even feel like parting the device from its plastic showcase. We definitely took a liking to the mouse’s appearance and presentation but does it really live up to the deadly expectation gamers are on the lookout for? Well, read on as we do the ‘samba’ with the Mamba and divulge the various aspects of the prey turned predator in this review.

Unlike most of Razer’s other products, the offering came to us packaged in a cool plastic transparent display case with the words ‘Razer Mamba’ sporting a scaly look and feel embossed just below the case. On the back of the box were the technical specifications in the same eerie font that Razer has been associated with now for a long time. Before we could actually pry it out of its nest, we could see the various additional accessories neatly packed up in individual slide-out black boxes and stored just below the case. These include Master Guide, Quick Start Guide, Certificate of Authenticity, USB cable, Rechargeable Lithium-Ion Polymer battery with battery door and a charging dock.

We although couldn’t just remove and use the mouse immediately. We had to initially attach one end of the fully sleeved USB cable to the computer and the other end into the charging dock. Once that was done, an eerie blue light could be seen doing the fading routine which is synonymous to light effects employed in other Razer products. After that came the turn of the Mamba itself. On removing it from its sheath and stand, we had to pair it with its charger by first switching the device on and then pressing the pairing button on the mouse and dock simultaneously. With that done, we could immediately use it in all its wireless glory. The charging dock also doubled as the wireless receiver unit.

We first attached the mouse to the charger for a recommended amount of 3 hours in order to charge the battery completely. It was a cinch charging it as we had to just make sure that it was aligned right and the battery charging connectors were meeting without any hindrance. On the left-hand side of the mouse is the battery indicator that flashes green to portray its charging. Even while it was being used in wireless mode, we could keep a tab of the charging. When in this particular mode, we see the Mamba doing a camouflage act with the black mouse mat as the scroll wheel light fades off completely when not in use for a period of time. Alternatively, you can even charge the mouse by plugging directly into a PC USB port.

Besides sporting a wireless mode, there is also a wired mode to take advantage of. This is great if you want to use the mouse while it’s charging rather than the alternate mode where it has to be sitting idle on the dock. For wired mode, you have to simply remove the end of the USB from the charger and insert it into the top of the mouse. On removing the plug, all you need to do is push the cable button to the right and then slowly slide the USB connector out. The Mamba adorns a smooth surface which just fits into the palm of the hand. The rear of the mouse isn’t cluttered with too many buttons expect for the essential ones which can be accessed without fear of being temporally affected by the Razer Precision 3.5G laser sensor as it is invisible. 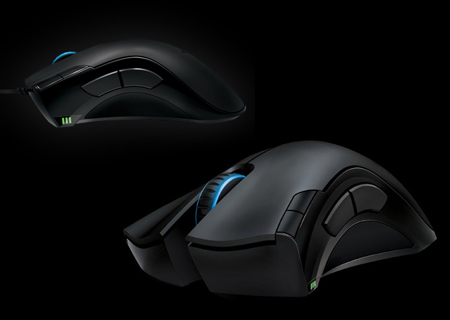 Along the left side of the mouse, there are two buttons for forward and backward actions. These come in handy while navigating through web pages on various browsers. Below these buttons, on either side of the mouse is a smooth strip which offers comfortable placement of the right thumb and pinky finger. The face of the Mamba comprises of the usual click and menu as well as scroll wheel which sports a ridged feel to offer a non slip surface while scrolling. Besides these, the face also included sensitivity stage up and down buttons for toggling between the sensitivity instantly during gameplay. Remember the battery indicator we mentioned about earlier. Well, it also acts as an indicator for the sensitivity stages by emitting red lights accordingly.

Getting down to the mouse’s practicality in the games, we see the Mamba like many other Razer products giving players that added edge they need during an intense game. The sensitivity stage buttons as well as the backward and forward buttons can be taken complete advantage of directly without any alterations. But for all those avid gamers out there, they can simply acquire wider options by downloading the Driver Installer from the Razer support website as there is no specific CD given along with the bundle. Once this is done, you can assign various options to any of the buttons as per your desire and comfort zone. Even the performance can be adjusted in the form of sensitivity and acceleration.

Various profiles can even be created with completely different settings while players can also manage all their Macros seamlessly. The company allows gamers to record macros of up to 500 keystrokes. They can be imported as well as exported onto the computer hard disk. The mouse also features on-the-fly-sensitivity. The fifth adjustment ability allows you to alter the lighting options which include the ones on the scroll wheel, battery indicator and charging dock. In addition to all this, the configurator also sports the battery and pairing indicators. Thanks to the inclusion of the upgraded Razer Synapse onboard memory, you can store more profiles and longer macro strings as well. This enables you to take all the custom mouse settings you created along with you anywhere. The mouse also offers 1000Hz Ultrapolling/ 1ms response rate and up to 200 inches per second/ 50g acceleration.

This review won’t be complete until the mouse is tested with a couple of games. We tried it with everyone’s favorite game Counter Strike. Although a bit on the heavier side when pitted against other standard mice, the maneuvering, aim and firing were like slicing through butter. You could shoot a flurry of bullets at one guy while quickly spinning around and putting more bullets into the other. We could even alter our preference during gameplay.

We especially appreciated the inclusion of the On/Off button situated on the under belly of the mouse.

All the buttons were aptly located on the Mamba mouse.

While toggling between the wired and wireless mode, we found ourselves hitting the buttons on the Razer Mamba mouse which in turn responded with unwanted clicks on the computer.

The whole package looked like some out of the ordinary or something that was gifted to us by extraterrestrials themselves. While setting and charging the mouse, the Quick start guide really came in very handy. However, when you power up the charger and mouse, don’t expect the Razer logos on both devices to light up like seen in quite a few Razer mice. What however did light up are the charging dock and mouse wheel. Overall, the electronic rodent really infused within us the fun of gaming with its sensitivity buttons as well as easily assignable options. As it is packed with attributes such as these, we give the mouse a 9 out of 10. The Razer Mamba can be picked up for a price of $129.99. So go ahead and sink your teeth into the Mamba today.