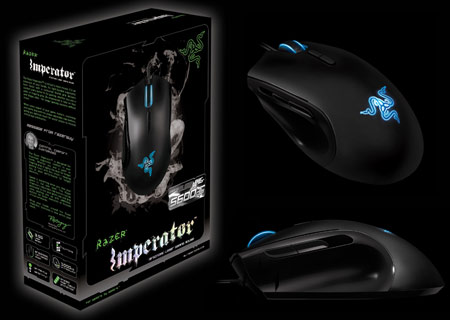 Intending to push through our review process, the Razer Imperator gaming mouse came packaged to us in a neat box which bears the image of the gaming mouse with smoke effects sketched behind it. With this appearance itself we were expecting the Razer offering to be just what a PC gamer needs and guess what, it didn’t disappoint us on that front. The term Imperator is known to be the equivalent to a commander. Razer is famous for christening its products with some catchy names and the term coined for this latest product is certainly apt.

On opening the box we found the Imperator packed with a Quick Start Guide, a Master Guide as well as one for the Mac, product catalog, two snazzy stickers of the company’s logo and of course the mouse sitting plush in a plastic box .

Let’s begin with the appearance of the mouse. We simply just had to plug it into the USB port of the computer and voila, there was an eerie blue haze emitting from the scroll wheel and the Razer logo located on the lower end of the mouse. What’s even cooler is that the blue light slowly fades and brightens at a steady pace. Other than that, the light and logo have no real functions to accomplish. One look at the mouse with its light effects and you will perceive this product to be something plucked right out of a late night sci-fi movie with the cloth cable cord adding to that effect. When compared to any ordinary mouse, this offering is noted to be slightly on the heavier side but is an added bonus while playing PC games. The mouse sports a clean and neat finish as there aren’t too many buttons cluttering the front or sides.

The palm of the hand fits comfortably on the surface of the Razer Imperator mouse while the thumb sits snuggly in the groove specially carved for the appendage. The Imperator is specifically designed with an ergonomic form factor fashioned for a right-handed person although left-handed users can also take advantage of this mouse by simply altering or rearranging the functions of the mouse. The product isn’t just for gaming purposes only. It also makes everyday Internet browsing as well as data seeking a cinch. There are adjustable side buttons for forward and back. Via these buttons, you can seamlessly navigate backwards and forwards on the Internet Explorer and Mozilla Firefox pages as well as other web browsers apparently. For the thumb to easily gain access to the buttons, they can be adjusted through a slider situated on the under belly of the mouse. There are five positional settings from which players can seamlessly adjust to their desired preference. 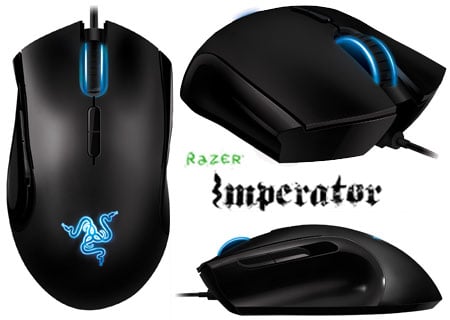 Located on the surface of the mouse just below the scroll wheel are the sensitivity buttons through which the sensitivity can either increase or decrease with just a couple of clicks. The total number of stages and the sensitivity difference between them can be adjusted up to a maximum of 5 stages. Now, the mouse can be used normally as soon as it’s plugged into the system but to acquire the plethora of customization options available, you would need to install the Razer Imperator software driver. Once this is done, you can customize all the buttons according to your desire. There is a Macros feature included which lets you record up to eight keystroke events, all in one macro. This tremendously helps while playing video games as, with a simple click of the button, all the commands can be seamlessly executed.

Being a gaming mouse, we put it to the test with the popular PC game Counter Strike. A notable feature was that we could adjust the sensitivity of the mouse even while in the middle of indulging in an interesting game. This comes in very handy when alternating between different types of weapons. The Razer Imperator makes those long hours of exciting gameplay more relaxing and easy on the wrist and palm thanks to its sleek appearance. The company has incorporated a Razer precision 3.5G laser sensor which cannot be espied by the naked eye but is still harmful if looked at directly. At the bottom, just next to the laser is a Profile Button. Another desired feature is that of the double-click inclusion which can be assigned to any button on the mouse. With this, you can perform not just a single click but also a double-click which proves to be useful in many areas while gaming as well as daily computing.

The Imperator has a great appearance which proves to be an apt addition to any gamers’ PC especially with its blue light and logo.

The mouse can, not only be useful while gaming but also for executing daily computer commands like alternating between web pages.

A comfortable gaming experience is obtained by the Razer offering.

The mouse which measures just 123(L) x 71(W) x 42(H) is highly portable in nature as it also stores all the gamers’ preferences which can be utilized with any computer.

It would be nice if we could choose our desired color emitted from the mouse rather than just a blue light.

The sensitivity buttons situated on the front of the mouse proved to be a bit of an inconvenience to us. It would be better if they were to be located maybe on the right side of the mouse.

To conclude, the Razer Imperator Gaming Mouse is a boon to PC gamers situated all over the globe as it boasts of some great customizable features while providing a comfortable experience and gaming-grade ergonomics. Gamers surely wouldn’t mind shelling out $79.99 for this device with specs like these. We give the gaming mouse from Razer a 8.6 on 10. So players can expect to spend longer hours gunning down those terrorists or just enjoying a comfortable fast-paced game of Quake.