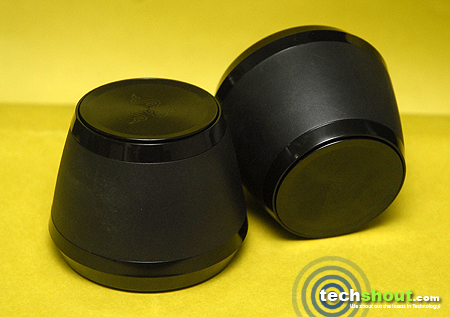 The grizzled adage ‘big things come in small packages’ appears no longer restricted to the ingenious legends of our history. Probably taking a cue from the above stated byword, manufacturers from the world of technology also seem to be slicing down their unit’s dimensions while integrating a slew of powerful innovations to justify what goes inside the byword. One such creator is Razer who has pulled off well in trimming down the breadth of its masterpieces that encompass voluminous features contrastingly. Be it stimulating gaming headset, attractive mouse or creative speaker, the company makes good in whatever way. This time as well, the attention was snatched when an interesting pair of cupcake-like speakers was cast loose to pull the crowd of gamers. Out of curiosity to know whether the Razer Ferox goes down swinging or is indeed ‘tiny but mighty,’ we indulged in an all-inclusive review.

The super portable Ferox speakers come rested in an attractive box which has audio/power cable, carrying pouch, quick start guide, a pair of Razer stickers and product information guide as its other lodgers. The customary ceremony of unwrapping the ‘to be assessed’ unit left us with a heavily piled up statue of anticipation pertaining to its comprehensive execution standard. Majorly ‘slaughtered’ is unremittingly the foremost impression that reined our mind on laying out the peripheral. The neat construction features a flat surface at the top embedding a glossy texture, while the bottom surface gets a simple appearance. The lower end leaves space for mini USB ports to connect the power/audio cable, whereas an LED rim encircling a rubberized border graces the speaker’s lower part.

Enclosed in an adorable, unconventional framework, the device feels extremely lightweight and can be easily slipped into bags or kept spaciously around the desk, consuming minimal space. However, we felt at unease with the included short wires that didn’t let us shift our desktop even a bit and felt the device being ‘rigid’ in terms of transportability.

In terms of design, the Ferox has been outlined neatly and looks elegant. ‘For Gamers’ inscribed all over, the portable speaker accommodates 360 degree omni-directional sound for all-round clarity, while 30mm drivers resting just below it have been placed to ensure impressive audio quality. The framework houses expandable resonance chamber and optimized digital amplifiers all across the petite body. The rear edge gets occupied by a rechargeable battery which doesn’t mess up the sophisticated appearance.

There’s a natty Razer logo sketched on the upper zone of the cylindrical cone-like structure while the base features a thick layer to stay knitted. The back shelters a micro-USB port which straightforwardly kicks off the journey once you press the device’s think tank. Though connecting the speakers to our desktop through a gold-plated audio jack and USB plug came facile, adjusting the device’s posture with ample space in-between looked a herculean task. This definitely left us with a fare notion ‘gamers might averse the inconvenience strung along between these two short, fiber-braided cable wires.’ If we turn a blind eye to passionate gamers for a moment, regular users might also discover the struggle as strong enough to dodge it for other substitutes in the market.

However, inaugurating our euphonious journey with Razer’s solidly carved Ferox speakers was pretty simple. Following the process of connecting it, we were merely asked to press the device’s upper surface with a gentle gesture to observe its gigantic abilities. Amplifying the quick experience was the rim that emanates a blue-colored hue and ups the elegance factor. Once attached to your system, the speakers automatically start charging, revealing blue illumination to blink incessantly at frequent intervals. At the same time, the time to feed slips under notice when the incorporated LED emits a red colored tint. 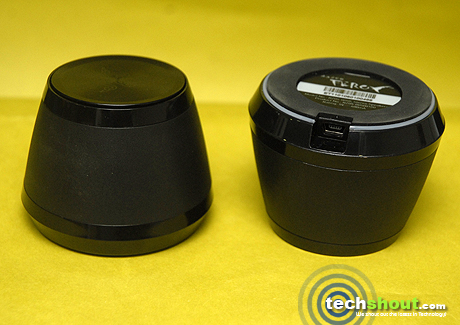 The speakers’ drivers have been strategically positioned to generate a phenomenal omni-directional soundstage that indeed fills one’s surroundings in every direction evenly and completely. Despite bearing a diminutive size, the device doesn’t forget replicating a subwoofer’s resonance with auto-expanding resonance chambers in order to deliver strong bass. At the same time, the uniquely outlined driver puts forth rich acoustics for an immersive sound stage.

However, we nowhere praise the speakers’ oblivion regarding not having integrated any volume adjustment button on its cable. This undeniably adds up to the agony and discomfort of constantly resorting to the gaming system for bringing alterations or appropriate modification in its levels. Those occupied in shooting their enemies may find the absence of volume adjustment button quite a lot spiky. Nevertheless, crystal-clear audio with lower distortion levels are well taken care of by the peripheral’s digital amplification that enhances its power efficiency substantially.

Another major disappointment appeared on analyzing the device’s skills in the non-gaming areas. The Razer Ferox speakers somewhere failed in delivering clear sound experience when handled a chore to play music. The device not only lacks bass there, but also fails to shake its leg when the highest volume point is touched. This literally settles the question which had people asking, ‘are these tiny but mighty ones meant for usual music listening purposes as well?’

On the technical front, the Ferox features battery voltage of 470mAh, 30nm neodymium magnets, and frequency response of 150Hz-20KHz. The refined, wee-sized device that gets wrapped up in a size of 70mm x 70mm x 53 – 64mm gave us a smooth run of around 10 hours playback time.

The Ferox has been designed to be extremely compact and goes well with one’s style factor.

The speakers come with a convenient carry pouch which makes the speakers even more mobile.

Missing out on a volume control button on its cable topples as yet another inconvenience.

The cables were too short to let us place the speakers spaciously, thereby augmenting the discomfort factor.

Overall, the Razer Ferox speakers are undoubtedly a great option for hardcore gamers seeking to intense their gaming sessions through incredible, powerful sound quality. However, people who are merely looking to soothe their aural senses can skim through some other options as well. As tiny as trendy girls’ stylish pouch, the speakers get extra attention for its condensed form and good performance when entered the gaming cage. Though fairly decent when playing pop, rock and other genres at mid-ranges, the innovative unit still feels hungry for some improvement. Taking its smallish structure, functionality and portability into consideration, we assign it a rating of 8 out of 10. The stylish Razer Ferox will take you on a ride at an MRP of Rs. 3,999.