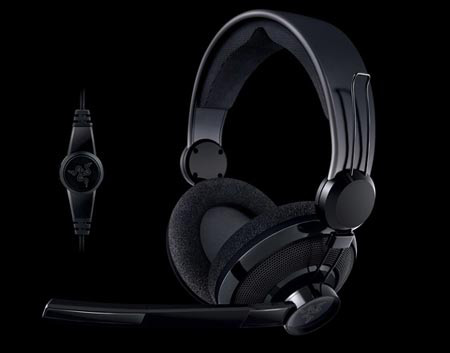 We usually meet skeptical expressions when we tell people that we’ve encountered the Razer Megalodon, Mamba, DeathAdder, Vespula and Lycosa and lived to tell the tale. That’s until we inform them that the aforesaid are of the extant Razer species. It’s a gig we reserve for parties when we find ourselves in a secluded corner that escapes the attention of most people. This review’s going to be our second dealing with a Razer product named after a humungous marine predator, the Carcharias. You don’t need to look closely in order to discover that what the company and its products are all about. You only need to go as far as the ‘For gamers. By gamers’ slogan instead. That’s what Razer is famous for and we’ve got a strong suspicion that they’re trying to gain absolute power over the gaming peripheral segment. So we’re sure you’ll be more than willing to lend us an ear as we sketch out a review of the Razer Carcharias professional gaming headset that is touted to let users ‘Command in Comfort’.

The Razer Carcharias headphones came packaged with the usual Certificate of Authenticity, a Quick Start guide and a Razer product catalog in a box that also slipped us a message by Robert ‘Razerguy’ Karkoff on the cover. There were the inevitable black and neon green Razer logo stickers that we’ve built a huge collection out of too. The big comfy headphones look very like the Megalodon deprived of the cool squarish audio control hub. Instead, you’ll be able to see the clip-on volume controls clinging to the cord just two feet away from the headset. The same also features a button for turning the mic on and off. The noise-filtering microphone placed along the left earcup is of the flip-down style that lets it get out of the way very obligingly whenever needed. We found the company’s logo etched onto the exterior of each earcup as well the volume controls. Trust Razer to imprint their logo on every surface they’ve got rights over. We’re not complaining; the three-headed snake pattern seems to denote a gamer that takes his business very seriously indeed, it’s like a cult thingamajig.

The earcups display a wire-mesh frame and are attached to the headband by sturdy wires matching the black color scheme that runs throughout the product’s exterior. We did feel that the rather light plastic headband lined with soft foam could snap under a moderate amount of pressure. So those who are in the habit of absentmindedly swinging their headphones by the headband should exercise some caution while using this peripheral. At 3m, the braided fiber cord is satisfyingly sufficient to let you stand up and do a tap dance or any other form of dancing that does not require a partner coupled with too much twisting and turning. After running our eyes along the headphones’ exterior for a while, we got down to checking if it can indeed live up the ‘gaming audio clarity and bass as well as maximum comfort over extended hours of gameplay’ endorsement. 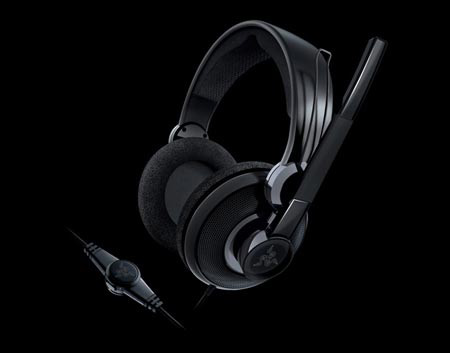 The cushy earpads and circumaural design of the earcups fade away low to moderately high levels of background noise. We guess we can’t really expect the level of background noise elimination that in-ear headphones like the Razer Moray+ can offer with this pair. But it works better at taking away external disturbances as compared to a lot of other headphones flaunting a similarly puffed up build. Our first impressions of the Carcharias’ audio prowess told us that it’s a solid gaming and music companion. There’s nothing like a pair of good headphones to squeeze the very last bit of gut wrenching action out of a game like Quake III. A gaming optimized audio peripheral like this is supposed to let you know the direction from which an enemy is approaching without any difficulty, which is exactly what it does. You don’t even realize how much noisier the game is as compared to Counterstrike until you’ve drowned the aural senses below all other mundane sounds. We spent three hours of fragging and getting fragged, without experiencing the slightest amount of discomfort or ringing in the ears. We were a little dizzy in the head after racing through the game while trying to hunt down the enemy right at their spawning spots though. Then we went on to take control over a grueling hostage situation that needed capable anti-terrorist commanders to see the team through several prolonged battles which culminated in large amounts of blood, gore and dismembered body parts.

The inclusion of the in-line microphone with its uni-directional noise pick-up pattern makes Razer Carcharias an efficient two-way communicator. The clip-on function allowed us to place the microphone at an optimal distance from the mouth instead of bending over it while issuing instructions to teammates. The headphones are sensitive to bass and the entire range of high to low tones. You can be a fan of Metallica, HIM, Apocalyptica, Lil Wayne, Celine Dion, Lady Gaga or all and sundry and still appreciate the audio quality rendered by this peripheral. The tech specs of the Razer Carcharias headphones involve a 20Hz to 20,000Hz frequency response rate, 102dB ± 4dB sensitivity, 200mW input power and 40mm drivers with neodymium magnets. The microphone’s frequency response reads at 50Hz to 16,000Hz, -37dB ± 4dB sensitivity and -50dB signal-to-noise ratio. It connects to a PC through two standard 3.5mm headphone and mic jacks. Though the device features easy plug-and-play connectivity to the PC, it’s a pity there’s no USB connectivity because having to plug in and plug out the loudspeakers every time you want to use the headphones can get quite bothersome.

The appearance of these headphones is of the typical Razer cool style. They also feel very comfortable on the ears during extended gameplay sessions.

Apart from offering hearing comfort over long hours of gaming, the device picks up bass and every other tone ranging from highs to lows without any difficulty.

There’s no USB connectivity. The headphones require headphone and mic jacks in order to connect to a PC. It’s annoying to have to stretch and pull out the loudspeaker attachment every time you need to play or hear music with these headphones on.

The headband seems to be on the delicate side as compared to the rest of this sturdy product. When we raised the peripheral by holding onto the headband, it seemed to be struggling a little with the weight of the earcups.

For $79.99, the Razer Carcharias makes for a decent pair of headphones that serve the gaming as well as the music rendering purpose. We’re chalking up a 9 out of 10 rating for this latest Razer audio peripheral.