No one can escape from the long arm of the law or from social media, as this couple from Madhya Pradesh holidaying in Goa found out to their embarrassment. Well, using the word ’embarrassment’ for anyone willingly engaging in this sort of display may be inappropriate.

The naughty picture gone viral through social channels like Facebook and WhatsApp, shows a man driving a motorbike in just a t-shirt and socks, while a lady clad in a skirt, coolly lies atop the fuel tank of the bike with her legs wrapped around his waist. 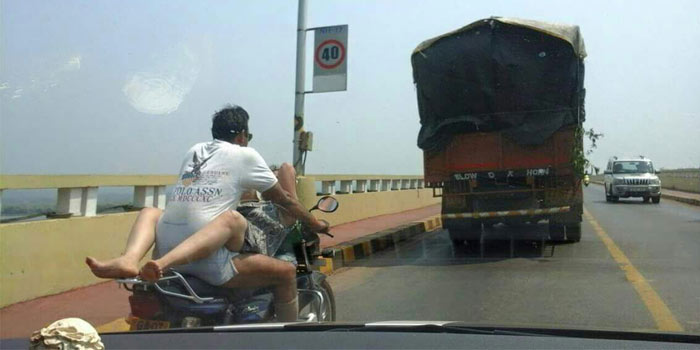 Unfortunately for them, the picture was also posted on the Facebook page of the Goan traffic police called ‘Goa Traffic Police – traffic violation reporting’. It clearly displays the license plate of the motorbike (GA-07-F-2551) the cheeky couple was riding. It appears to be a rental bike and the bridge in the photo is Panaji’s Madovi Bridge, NH-17.

The police took note of it and on Monday, traced the two who were staying at a starred hotel. They were fined Rs. 1000 and booked for dangerous driving under Section 184 of the Motor Vehicle Act. This public display of ‘affection’ by the couple also irked the sentiments of others including a few politicians who obviously aired the expected opinions.

India may be known as a country whose people are easily offended in spite of its cultural diversity. But there’s a time and place for romance and these holidaymakers from MP were putting onlookers at risk with their indecent antics. Looking away is not an option when our eyes automatically notice anything out of the usual in our field of vision.

As for the unnamed lovers from MP, they’ve surely had a holiday they’ll never forget.