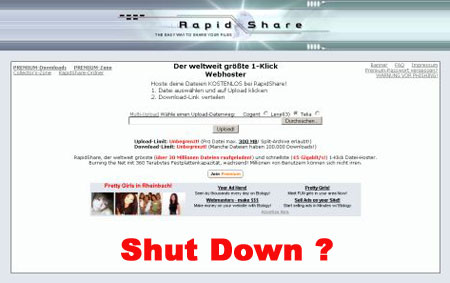 Popular file hosting website Rapidshare.com seems to be down. Rumors are circulating on the Internet stating that Rapidshare has been shut down by authorities following a court order.

An entry on Wikipedia’s Rapidshare page states the legal trouble that Rapidshare is facing “On 19 January 2007, news broke that German collections agency GEMA had claimed to have won a temporary injunction against RapidShare.com. “The latter is said to have used copyright protected works of GEMA members in an unlawful fashion.” To date RapidShare has claimed not to have any knowledge of the content uploaded by the users and of not being in a position to control the content. Through its injunctions the District Court in Cologne had now however made it clear to the company that the fact that it was the users and not the operator of the services that uploaded the content onto the sites did not, from a legal point of view, lessen the operator’s liability for copyright infringements that occurred within the context of the services, the spokesman added. Currently rapidshare is not working.”

Perhaps the downtime is related to the legal proceedings but on the other hand a relatively unknown website roundviews.com posted an quote that appeared to have come from Rapidshare’s technician Steven Gircham. Apparently Gircham said, “There are rumors concerning attacks made on the Rapidshare.com servers. There are also rumors that Rapidshare has been shut down by a court order. These rumors are false. We would like to apologize to our users and inform them that no data has been lost. There have been some hardware issues as a result of high bandwidth and server overload. We are doing our very best to resolve the hardware issues, and users should expect uptime by midnight tonight (GMT)”

As of now things are not clear and the truth is not very apparent. Rapidshare.com servers could not be pinged when this article was written though Rapidshare.de was working fine.

Whether it’s a server upgrade, website takedown or even a DOS attack, only time will tell.

Update: Rapidshare.com seem to be back online again.

Rapidshare updated its news page with the following note, “Unfortunately, starting at 5 pm CET, one of our carriers experienced a severe technical problem with their hardware, causing a loss of 50 gigabit of bandwidth. Therefore RapidShare was unavailable for several hours. We already have taken steps to avoid this particular problem in the future.”