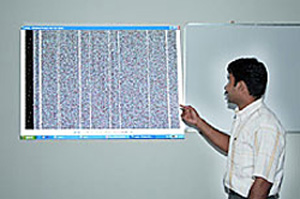 It may be time to bid goodbye to CDs, DVDs and Zip drives. According to a report from the Arab News, a university technology student at the Muslim educational society Engineering College in Kerala, Sainul Abideen has invented a method of storing massive amounts of digital data on just a plain old piece of paper. Abideen claims that the paper has the storage capacity which is many times more than the capacity of the best Blu-ray or HD-DVD discs.

Abideen’s invention, which goes by the name of Rainbow technology can enable him to store up to a massive 450GB on just a piece of paper. However, after a real life demonstration of the same, it was concluded that the technology still needs more development.

Abideen claims that his Rainbow system is much better than binary storage, because it uses geometric shapes such as squares and hexagons to represent data patterns, instead of the usual binary method that uses ones and zeros to represent data.

Besides, color is also used in the Rainbow system, to represent other data elements. In order to read the Rainbow prints, all that is required is a scanner and specialized software.

The reporter of Arab News claims to have seen 450 pages of fully printed foolscap being stored on a 4-square inch piece of Rainbow paper. The reporter also claimed that he was shown a 45-second video clip that was stored using the Rainbow system on a plain piece of paper.

Interestingly, the 45-second video didn’t say a lot, and if the Rainbow system can store up to 450 GB, then soon we would be watching full-length high-definition videos from a piece of paper!

One of the major advantages of the Rainbow system is the fact that it should cost a lot less to produce than the typical polycarbonate DVDs, CDs and now Blu-rays. Abideen claims that huge data banks can be constructed out of Rainbow-based storage medium. The main attraction seems to be the cheap paper.

As of right now, Abideen’s system is still under research at the Muslim Educational Society Engineering College and although no major companies have expressed interest, Abideen is confident of the system’s future. According to the report, Aibdeen is hard at work at developing a Rainbow scanner that would be small enough for integration into notebook computers. If developed, a Rainbow printer will likely be next up.

Currently, of the several options available for data storage, DVDs are the best mode, but are yet expensive. Sianul has said that a CD or DVD consumes 16gms of polycarbonate, which is a petroleum by-product. While a CD costs Rs. 15, his paper or plastic-made RVD will cost just about Rs. 1.50 and will even have 131 times more storage capacity.

Sainul is also working on project Xpressa, a software package for regional languages. This will enable the Internet browser to access the newspapers available on Internet through mobile phone in audible form.