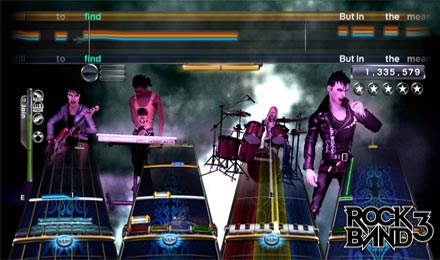 MTV Games and Harmonix have previously dished out tracks by Bon Jovi, Talking Heads, Lynyrd Skynyrd, Bad Company and 38 Special. Rock Band fans are now treated to two packs of songs from the acclaimed band Queen that include new titles to the platform as well as harmonies, keys and Pro Guitar/Bass upgrades made to earlier released songs.

The band Queen was formed in England back in 1970 and comprised of frontman Freddie Mercury, Brian May, Roger Taylor and John Deacon. The rock anthem ‘Bohemian Rhapsody’ already made its way into the Rock Band 3 on-disc soundtrack. Players will be able to purchase Pro Guitar/Pro Bass additions for their previously acquired Queen DLC. They can also get their hands on the Rock Band 3 versions complete with harmonies and keys. Five new songs are offered as DLC with Pro Guitar/Pro Bass upgrades.

The companies have split the packs into ‘Queen RB3 Enhanced Pack’ and ‘Queen Extravaganza Pack 01’. The former includes updated Rock Band 3 versions of ‘I Want to Break Free’, ‘One Vision’, ‘Under Pressure’, ‘I Want It All’, ‘Killer Queen’ and ‘Somebody to Love’. The latter also features Rock Band 3 versions of Lego Rock Band titles namely ‘We Will Rock You’ and ‘We Are the Champions’. Other new inclusions are ‘Hammer to Fall’, ‘Now I’m Here’, ‘Play the Game’, ‘Keep Yourself Alive’, and ‘Tenement Funster’.