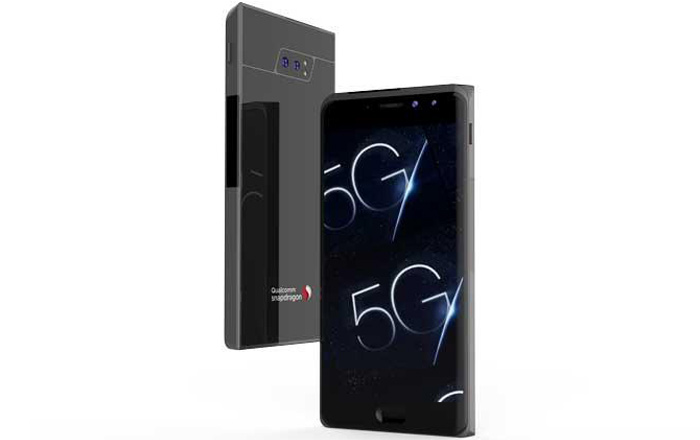 Qualcomm took a big leap towards 5G recently when it announced that it had conducted the first successful demonstration of a 5G data connection on the Snapdragon X50 5G modem. It even shared a mmWave (millimeter wave) 5G smartphone reference design.

Qualcomm says the Snapdragon X50 5G modem achieved greater than gigabit per second download speeds using multiple 5G carriers in its test. It was also able to establish an over-the-air connection through its miniscule 28GHz mmWave antenna module. The chip itself is capable of 5Gbps speeds once full 5G deployments are in place.

As for its 5G smartphone concept, the futuristic-looking handset is 9mm thick and sports a trendy edge-to-edge screen. The back is made out of glass and features a pair of cameras and LED flash units. The reference design will be used to test 5G modems, networks and radios with manufacturers in the coming months.

5G devices will likely hit stores at some point in 2019 or 2020. Big names like Apple, Google and Facebook have already begun experiments with 5G in anticipation of this monumental shift in technology using the same mmWave broadband. The latter cuts down on latency and expands data transmission capacity, but faces line of sight issues.

Qualcomm has also unveiled its latest Snapdragon 636 processor, a sequel to the Snapdragon 630. The mid-range 14nm SoC features support for 600Mbps LTE speeds, 24MP cameras, and ultra-wide FHD+ panels. It starts shipping out to vendors starting in November, so it’ll take some time before it hits markets.