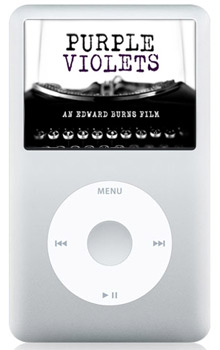 Apple has taken one step and made a giant leap into the movie business with the addition of the contemporary comedy-dram “Purple Violets” on iTunes. Even though there are many movies available via iTunes, what makes the addition of this movie on iTunes stand out is the fact that it is Apple’s first direct-to-net debut on iTunes.

This movie which has been directed and produced by independent filmmaker Ed Burns, happens to be the first feature film to premier exclusively on iTunes.

iTunes already has a catalog of 500 movie titles including “The Princess Bride, “Mean Girls” and “An Inconvenient Truth” amongst others.

According to Eddy Cue, Apple’s vice president of iTunes, “We’re thrilled Ed Burns chose to premiere ‘Purple Violets’ exclusively on the iTunes Store. Apple continually strives to provide the most innovative offerings to our customers and we look forward to more great independent film makers debuting their films via iTunes.”

“You don’t need to be sitting in a massive theater to experience two people sitting on a park bench trying to figure their lives out. In fact, a lot of my stuff you could almost listen to it as an audio play, there’s so much wall-to-wall dialogue,” Ed Burns was quoted as saying in a phone interview.

Purple Violets is immediately available on Apple iTunes for a price of $12.99.