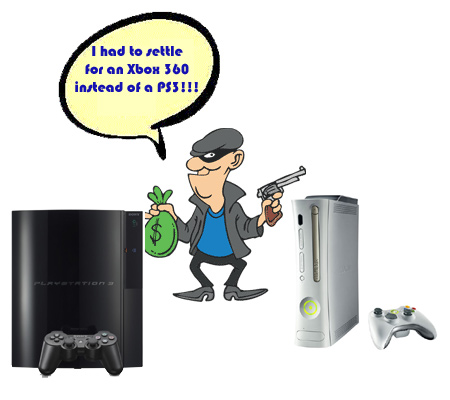 A recent report filed, has revealed about a robber who broke into a London area branch of Blockbuster Video in the greater London suburb of Thornton Heath. Though he was originally heading for a PlayStation 3 (PS3), he had to ironically settle for £500 ($996.30) worth of goods and an Xbox 360.

As per the site thisislocallondon.co.uk, the executor of the act scared two terrified female employees by a handgun and demanded that they give him a PlayStation 3. However, apparently the store didn’t have any PS3s, so the saddened thief asked for an Xbox 360 instead.

After taking Microsoft’s next-gen console, he went ahead and grabbed £60 ($119) from the till and a few games he intended to play, from the shelf on his way out. Though no one was injured in the incident, there was a delay in the investigation as police ended up in the wrong store due to a “mix-up.”

A Metropolitan Police spokesman said, “I can confirm that, due to a mix-up with the address, there was a 20-minute delay in officers arriving at the premises.”

The site added that the police have described the suspect as a 6ft black man, aged around 25 years, of medium build who wore black, baggy trousers, a black hooded top – with the hood over a baseball cap – and a jacket which had dark blue sleeves and a green body.

Any witnesses in the area are asked to contact Crimestoppers anonymously at 0800 555111.

Perhaps, if I was in place of this thief, I’d head for a Wii. What about you?