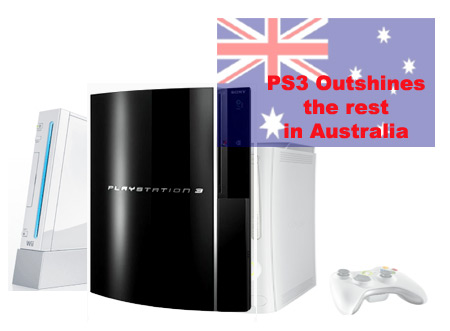 Sony Computer Entertainment Australia has revealed some rather shocking stats and figures. Apparently the PlayStation 3 is outselling rivals next-gen consoles Wii and Xbox 360. Even though the Nintendo Wii has been doing well in the smallest continent and in fact has the distinction of reaching the 100,000 mark fast in terms of sales, Sony is yet claiming that the PS3 is selling much more than the Wii.

Sony Computer Entertainment Australia’s managing director Michael Ephraim maintain that the PS3 has been the best selling console in Australia since it launched there. He continued by saying the PS3 has outsold the Wii and Microsoft’s Xbox 360 every week.

In an interview with Gamespot AU, Ephraim had said, “Since March 23, the PS3 has been the number one-selling next-gen console in Australia, and this is GfK figures. We’ve now sold 50,000–and we’re very excited about the fact that it’s being sold in retailers that are gaming retailers as a gaming device and other things, but as you’ll notice it’s now being sold in Harvey Norman consumer electronic stores as a Blu-ray player.”

The fact that the PS3 has moved 50,000 units in Australia since March 23 is quite impressive. The Wii has sold 100,000 units since December 7th of last year. That means there are more Wiis in Australian homes but the PS3 is selling better and could perhaps catch up to or surpass the Wii.

Keeping the GfK data in mind, Sony sold 50,000 PS3’s within three months of its launch. While on the other hand, the Xbox 360 sales reached 100,000 in around seven months while the Wii achieved the same target in six months and two weeks.

But even if Wii is outnumbered in Australia, it’s difficult for the PS3 to catch up with Wii’s sales in the US and Japan as figures in these two countries seem to be absolutely on Wii’s side. One thing that has always been on Wii’s side is its affordable price. And that is certainly one of the key reasons for its big number sales.