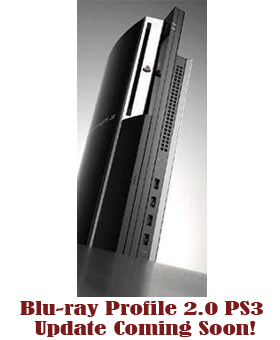 The Blu-ray 2.0 spec or BD-Live will officially see the light of the day by March-end and Sony has now revealed that the PlayStation 3 firmware update v2.20 will bundle the new exciting features to the PS3. Owners of Sony’s next-gen console will be able to access downloadable video content, ringtones, interactive movie-based games, and lots more thanks to the new software. In addition, users will also be able to copy photos and music playlists over USB from their PS3 to the PSP

Scott A. Steinberg, vice president, product marketing, SCEA said, “With Blu-ray established as the high-definition optical disc standard, more consumers are ready to jump in and take advantage of everything the format offers.” Adding, “Whether you want to download movie extras, send ringtones to your phone, or play interactive games, BD-LIVE will offer exciting new ways to enjoy a Blu-ray movie. With these regular firmware updates and future-proofed technology, SCEA is making the 10-year lifecycle of PS3 possible.”

Some of the key features that the Blu-ray 2.0 spec or BD-Live will sport are: