If you thought next-gen gaming is all about the PS4, the Xbox One or high-end PCs, you’re most certainly ignoring virtual reality experiences like the Oculus Rift and the newly revealed PrioVR. Under development from YEI Technology, this advanced motion-tracking suit had gone through an unsuccessful Kickstarter campaign last year, but this time around, it managed to receive its full funding within just a few days.

Aimed at offering natural and full-body interaction with video games, PrioVR enacts your movements into virtual environments in real time, and allows you to interact with on-screen items as well. It does this with the help of high-performance inertial sensors which grant 360 degrees of low-latency and real-time motion tracking without any cameras. 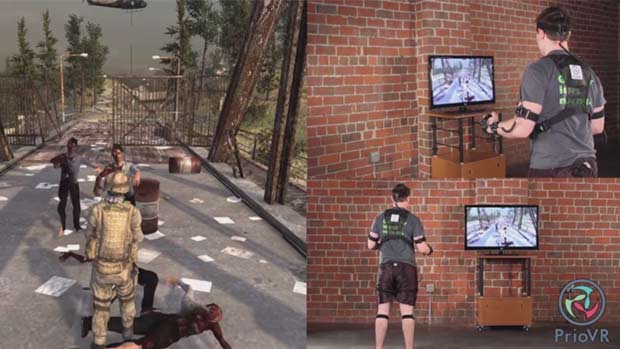 The suits are made in such a way that the sensors are placed on key points of your body. Navigation and actions of on-screen characters are taken care of by two hand-controllers bearing action buttons, triggers and joysticks. PrioVR is of course wireless, and it enables multiple simultaneous users. It’s moreover, compatible with the Oculus Rift as well. It’s still not sure whether it will work with gaming systems or just PC, or whether it will have its own games, which is very unlikely.

The PrioVR suit will be doled out in 3 different avatars. The Lite version will grab hold of 8 sensors placed on the upper body, thus allowing you to play while sitting down on the couch. The Core version will feature 12 sensors for full-body tracking. And the Pro variant will provide added precision with its 17 sensors.

PrioVR arrived on Kickstarter hoping to get $75,000 worth of funding, but it has already exceeded the $130,000 mark. It’s supposed to reach early backers this June.