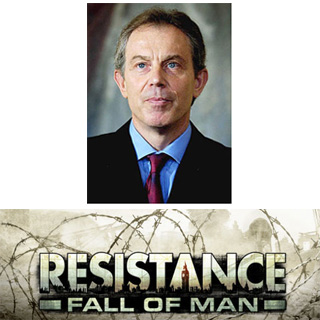 A few days back, you read here about the Church of England targeting ‘Resistance: Fall of Man’ and wanted Sony to apologize and withdraw the game as the company used the interior of the Anglican cathedral for a virtual gun battle.

Now UK Prime Minister Tony Blair has responded to complaints put forth by the Church regarding Resistance: Fall of Man, telling parliament that companies must take responsibility for the impact their products have.

During the Prime Minister’s Questions, Tony Lloyd, MP for Manchester Central, started asking his question by observing, “When large organisations like Sony find their copyright has been breached, they’re very quick to use the law.”

He added, “Would the Prime Minister agree with me then that when Sony used images of Manchester Cathedral as part a game which extols gun violence, this was not only in bad taste but also very, very insulting to not simply the Church of England, but people across the land who think it’s inappropriate that big corporations behave in this way?”

Blair replied, “I agree with my honourable friend. I think it’s important that any of the companies engaged in promoting these types of goods have some sense of responsibility and also some sensitivity to the feelings of others. I think this is an immensely difficult area, the relationship between what happens with these games and its impact on young people,” the prime minister went on.

“I’ve no doubt this debate will go on for a significant period of time, but I do agree. I think it is important that people understand there is a wider social responsibility as well as an interior responsibility for profits.”

During the past weekend, the Church of England demanded an apology from Sony for the depiction of Manchester Cathedral in Resistance: Fall of Man.

Developer Insomniac has so far declined to comment about the issue. On the other hand, SCEE has confirmed plans to contact Church authorities in an attempt to resolve the matter.

Though there are probable rumours of a legal action taking place, what the Church is most interested in at present is an apology.