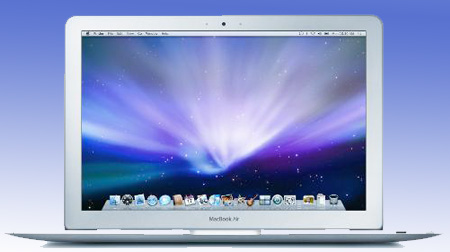 “From time to time we adjust the price of configure-to-order options for our systems. The options to upgrade a MacBook Air to a faster Core 2 Duo processor and a 64 gigabyte solid-state drive are now more affordable,” said spokesman Bill Evans, reported Los Angeles Times.

“In this market, it’s been tough to sell,” he said. “You have creative pros, who want all the bells and whistles, but the MacBook Air is so thin, it doesn’t really have that.”

Although the laptop was launched with much hype surrounding it, then there were reports of people getting cakes and elbows cut with the ultra-thin and razor sharp MacBook Air. Well there are always two obvious reasons for such a kind of price cut – 1.the price of the computer components and hardware dropping down, 2.the sales of the product going down.

Rob Enderle, principal analyst at the Enderle Group, San Jose reasons the drop in price by saying “The Air hasn’t been selling as well as Apple would like.” He also suggested that the base configuration is “underpowered. I’ve had friends who returned that version because of the performance. They didn’t even consider exchanging for the upgraded version, they were so disappointed. The only one to get is the better one, and Apple is being smart by encouraging people to buy that version. Apple wants happy customers.”

While the aforementioned problem could be one of the reasons, it will also be logical enough to believe that the Apple MacBook Air price cut is due to the $100 drop in the Intel Core 2 Duo processor and $400 reduction in the price of the 64-GB solid-state drive.

Whatever the reason is, prospective MacBook Air owners, enjoy!