Following the price cut in China, the Xiaomi Mi 4 smartphone in India has also been given the same treatment and the company has officially announced the new reductions. Sadly, there’s no revised retail tag for the Mi Pad despite it getting cheaper in its home country and that’s mainly because the tablet was launched with a discounted amount in the first place. 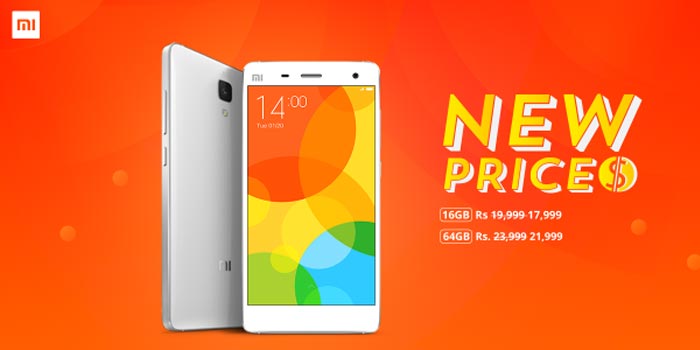 It was just last week that Xiaomi held a Mi Fan Festival sale in India in celebration of its 5-year anniversary. Here, the company sold the smartphone in question at discounted rates for a single day which are the same as the amounts listed above. Just so you know, the new retail tags aren’t a limited time offer – They’re permanent.

Here’s what the Xiaomi Mi 4 has to offer in specs:

In other news, the company will be launching a new global smartphone at a premier event in India next week. The phone is said to be the Mi 4i which is a toned down version of the original. Leaked benchmark listings suggest that the device will be powered by Android Lollipop and have a 64-bit octa core processor. More information on the handset can be found over at this link.

Also read: Xiaomi Mi 5 confirmed to come with MIUI 7 based on AOKP Android 5.1

The new retail tags for the Xiaomi Mi 4 have been reflected on Flipkart and other stores offering the smartphone.