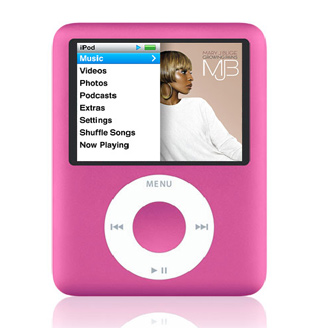 In September 2007, Apple had unveiled the next-generation of its most notable product till date- the iPod nano music player. At the time, it was only available in silver, black, blue, green and red. But, now the Cupertino-based company has released the iPod nano in pink, a color which most people (read: girls) would kill to have in their hands! Besides, it could also make a wonderful present for the special woman in your life, this Valentine’s Day.

The iPod nano which features a 2” display allows users to watch new iTunes Movie Rentals, or even TV shows and music videos that have been purchased via the iTunes Store.

Encased in an all-metal design which is made from anodized aluminum and polished stainless steel, the new nano is no longer miniscule as its predecessor; rather it sports a rounded shape and is much broader.

However, the new iPod nano does have an edge over its predecessor as it features an enhanced user interface that shows off album artwork and photos. It also included CoverFlow, which allows the user to scroll through their entire music collection album cover-wise using the Click Wheel.

“Customers are going to love the gorgeous new pink iPod nano. The pink iPod nano is perfect for people who want a great new color this spring, or who are searching for a special Valentine’s Day gift,” said Greg Joseiak, Apple’s Vice President of Worldwide iPod Product Marketing.

The newly announced pink iPod nano is however, available only in an 8GB capacity. We do hope that soon this pretty pink will be available for the 4GB nanos as well. The new pink iPod nano carries a price tag of $149.