Prepare yourselves for Snapdragon 805 powered WP8 devices with 2K resolutions

The Windows Phone platform has had a slow start in the mobile ecosystem where it offered a robust and smooth UX, but fell short where apps and hardware is concerned. Well, Microsoft has finally managed to catch up to the competition with new devices powered by the latest Snapdragon processors and we’re most likely to see even more powerful handsets surface in the future based on the upcoming Snapdragon 805 chipset.

Qualcomm is apparently getting its most powerful SOC ready for the WP8 platform. A smartphone going by the name Qualcomm Liquid has been spotted on GFXBench running Microsoft’s mobile OS. The handset is most likely a reference device, but it does have some pretty interesting specifications. The phone is listed with the Adreno 420 graphics module which will be included with the Snapdragon 805 chipset. 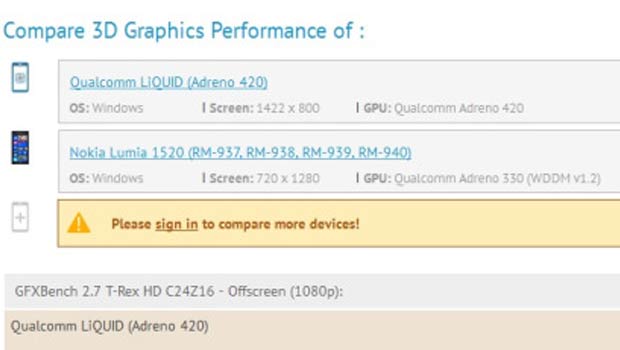 Additionally, the Qualcomm Liquid is said to have a cropped 2K display resolution of 1422 x 800 (2560 x 1440 is proper 2K resolution). Sadly, the benchmark listing has been pulled from the website, but NPU managed to grab a screenshot of it which is embedded above. Currently, the Lumia 1520 and Icon from Nokia are the only high end WP8 devices available on the market.

The Finnish giant is expected to launch a new flagship soon. Even Samsung is working on a top-tier WP8 handset, the Ativ SE which will be exclusive for Verizon. The phone will arrive this month with a FHD display and a Snapdragon 800 SOC. We’re also been hearing rumors about HTC repackaging its One M8 handset with WP8, while Microsoft has confirmed new OEMs have joined the lineup.

The Snapdragon 805 is still far from being made available. The chipset is expected to launch during H2 2014.