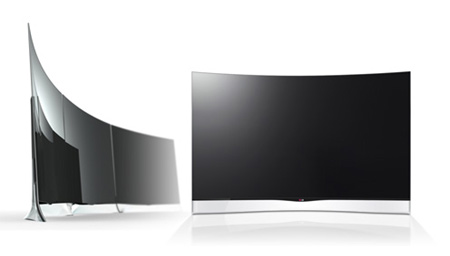 The OLED TV territory has got a new boost, even as LG has put on sale its 55-inch curved television set at a price of KRW 15 million which translates to about $13,500. Christened with the model number of 55EA9800, this piece of innovative technology is all geared up to ship next month, but for now, the company’s home country will be the sole beneficiary of it.

It goes without saying that the tech giant has become the first and only company to commercialize both the flat screen OLED TV as well as its curved version. And hence, it remains to be seen, how the markets receive this headway. Given the high retail value, masses will definitely be staying away from it, but the manufacturer will have its eyes peeled on its target audience at the moment.

As it observes, the OLED segment of displays is expected to grow till up to 7 million units by 2016. Apart from explaining the reason for the company’s full-blooded approach towards the category, this little factoid also explains why even Sony and Samsung have jumped the OLED bandwagon. The former’s 4K TV sets which are claimed to display visuals with an eye-popping resolution of 4,096 x 2,160 pixels had grabbed quite some attention when they were unveiled at this year’s CES.

Moving on, the EA9800 model that has been made available for pre-order now, is said by its maker to provide ‘IMAX-like’ viewing experiences right at the homes of its buyers. The entire screen surface of this TV is equidistant from the viewer’s eyes, and this seemingly eliminates the problem of screen-edge visual distortion as well as loss of detail. Apparently, achieving this optimum curvature needed five years of research.

This set is just 4.3mm thin and weighs in at a mere 17 kilograms. Technologies like WRGB, the Four-Color Pixel system, Color Refiner and more, ensure optimal support for high-definition visuals. And then there are its transparent film speakers that are housed inside a crystal clear stand.

LG is still to announce when it will be making the 55-inch OLED TV available in markets outside its home region. We’ll have more on it when it does.