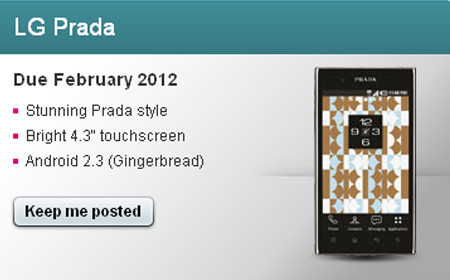 The Prada phone by LG 3.0 was seen paying Korea an early visit last month and now it has surfaced on the T-Mobile portal to indicate that its release in the UK may just be around the corner. Announced last year amidst a lot of speculations, this LG and Prada handset is the third offering being churned out from the partnership between the electronics giant and the renowned fashion house.

Sitting pretty under the ‘coming soon’ label on the T-Mobile website, the Gingerbread slice is expected to receive an Ice Cream sandwich upgrade in the near future. It dons a 4.3-inch full glossy NOVA touchscreen with 800 x 480p resolution and arrives fueled by a 1GHz dual core chip. As for fans of the fashion label, the handset is adorned by the Prada logo and its rear panel comes draped in a Saffiano pattern. 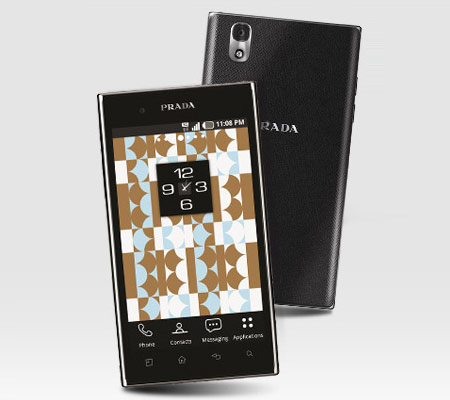 Additionally, the device sports a primary 8MP camera and is complete with 8GB of memory to save content. Besides offering dual band Wi-Fi connectivity, it has been endowed with the Floating Mass Technology from LG. Spotted by Unwired View on T-Mobile, the smartphone falls in step with its predecessors and sports a simple chassis, which is sleek at 8.5mm. It also houses a 1540mAh battery and is complete with a black and white UI put together by both companies.

Although the image on T-Mobile UK indicates February 2012 availability, the Prada phone by LG 3.0 release date and price specifications have not been laid out on the website quite as precisely as we would’ve liked it to be.