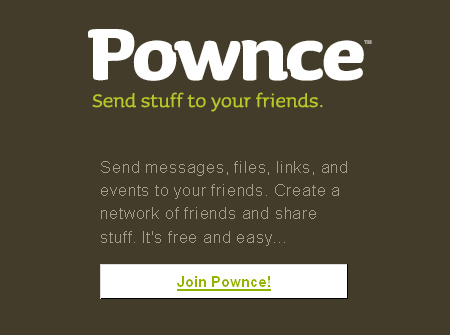 A new social networking and micro-blogging site called “Pownce” has been rolled out. Pownce has been founded by internet entrepreneurs Kevin Rose, Leah Culver, Daniel Burka, Ariel Waldman and Shawn Allen, who came together to develop a little company called Megatechtronium (quite a tongue twister!), that makes this software. On Pownce, users can share messages, files, events and links with their already-established group of friends.

A private invite-only beta version of Pownce was launched on June 27, 2007, after which the site introduced their public API on October 30, 2007. At first it was slated to be a platform essentially discussing the launch of the API, however in the present day it serves to collect feedback and assist developers. As of now there are an odd 150,000 people using the service.

Going chronologically forward, on November 12, last year, Pownce rolled out a custom theme editor for Pro users. In addition, eight more preset themes for non pro users was also incorporated. A little later on December 12, a mobile version of Pownce’s service was released, which was available on m.pownce.com.

Pownce includes the ability to share files (10MB limit, 100MB with a pro account), invite other users to events (synced with Google Calendar/iCal) and track the user’s messages.

The general availability of Pownce bundles in a new version of the desktop client, which is developed on the Adobe Air platform. With Version 3 of the Pownce desktop client users can directly respond to incoming messages.

An exciting new tool in the public version of Pownce, actually searches for a user’s existing friends on other social networking sites and tries to locate them on Pownce.

With “Featured Powncers” you can have a look at the active and apparently interesting people that can be followed on the site.

Comparisons of Pownce with platforms such as Twitter, Facebook etc are quite evitable. Let’s see if Pownce ends up offering some incentives for users to give up these old established names and switch to the new service.