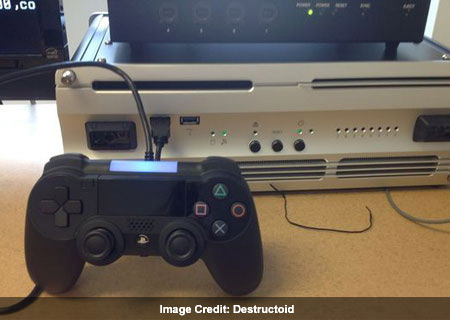 An image of what seems to be a prototype of the PlayStation 4 controller has come our way through a leak, and will have some interesting and questionable capabilities, if reports are to be believed. The PS4 has itself been rumored for quite a while now, speculation that was fueled by Sony’s own teaser of a February 20, 2013 announcement.

Going by the image, the device looks almost alien when compared to the present DualShock 3. It appears to have been reinvented in several aspects with some things moved about, some changed a little bit, and others added. For one, it seems as if the D-Pad on the left and the action buttons on the right have been set into a zone which is almost crater-like in appearance.

The D-Pad itself is chunkier and the buttons on it are more closely spaced. And then there is a mysterious rectangular indentation on the left just above these directional buttons. But that might be one half of Sony’s set of start and select keys, as there is an inkling of a similar switch just above the action buttons (probably hidden in shadow). There’s definitely space for it. 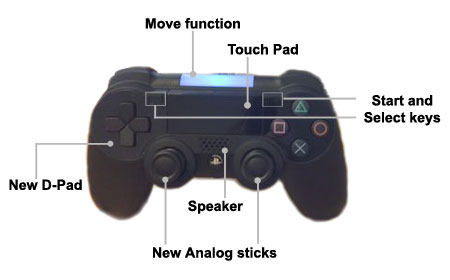 And what about the analog sticks? They seem to imbibe a few things from Microsoft’s controller such as a concavity when moving from the periphery towards the center, although they appear to regain convexity (if only slightly) further towards the interior. This creates a ring-like appearance around the analog sticks, and it is most likely the result of the Japanese company testing out a design for maximum comfort.

From what can be made out, in the centre of the device there appears to be a touch pad; something that could be similar in effect to the one found on the back of the PS Vita. The most intriguing part though is the glowing section near the top. This might just point to the inclusion of Move-like capabilities, although it looks like it would be hard to swing around something so bulky. There is also something resembling a speaker near the PS button, which draws similarities to Nintendo’s Wiimote.

Destructoid got hold of the picture and is reporting that several sources have confirmed that the image is real, but has been labeled an early prototype of the PlayStation 4 controller. The fact that this is an early model could mean two things. One: Sony is good at keeping secrets and this was in existence a long time ago. And two: the PS4 is still a long way away and won’t be announced in about 5 days’ time. One thing is for certain; both these implications won’t go down well with fans.