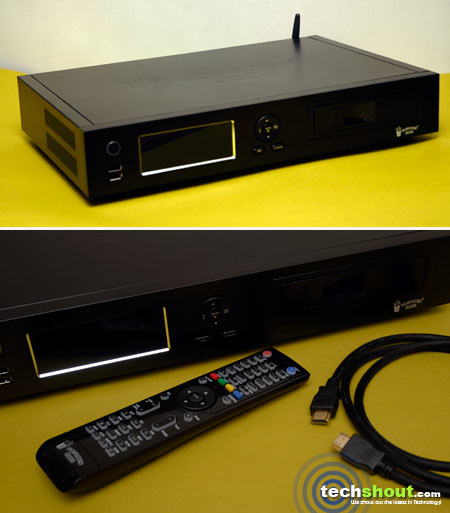 Some years ago, to enjoy a movie at home, all you had to do is pop in a video tape in a player and let the magnetic power to do the talking. As we moved to optical-based storage formats, ways to store media increased offering numerous ways to enjoy the joys of an audio-video experience. One such way is to get a NMT. Wonder what that means? Well NMT stands for a Networked Media Tank.

Very few companies have been making such devices and Popcorn Hour is one of them. They were kind enough to send us a review piece of the Popcorn Hour C-200, which happens to be their newest, biggest NMT. The package also had a remote control, HDMI cable and a power cord. The RC was quite impressive, especially the way the buttons lighted up and the makers have been intelligent enough to put great functionality in to it. Coming to the C-200 NMT, it is quite bulky when you hold it. It looks like your normal DVD player. However, it is quite bigger than that as it seems that they have put 2 DVD players on top of each other and squeezed them. But overall size and weight should not be an issue as the media tank has a lot to offer. The device gives you an option to put in your own hard drive, which is great as you can use it to store all your audio-visual data over there. Even images can be stored and viewed with great ease. 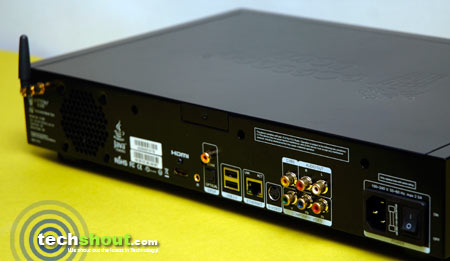 Usually whenever there is an option to play data from drives, there is always a concern if the media player will play a certain kind of a file. With the Popcorn Hour C-200 there shouldn’t be any as the makers were kind enough to ensure that most of the major media file types are supported by the NMT. Yes, video containers such as MPEG1/2/4 Elementary, AVI, MKV and MOV (H.264) are supported amongst others. As for the video decoders, expect support for Xvid SD/HD, WMV9, the usual MPEG formats and SMPTE 421M (VC-1). The tank is good enough to be your audio hub also. Just like video, it supports a lot of audio file formats. For the audio containers, Popcorn Hour has put support for aac, m4a, MPEG audio (mp1, mp2, mp3, mpa), wav, wma, Flac and Ogg. The audio decoders that are supported are Dolby Digital, DTS, LPCM and Vorbis amongst others. Just like video, it played most of the audio files well. However, there were some issues when we were playing Flac files, which is appalling as that format is quite popular. Dolby and DTS are also supported as audio-pass through.

Besides audio and video, the player also supports images and text. With the former, we were able to see jpeg, bmp, png, gif and even tiff images. As for the .txt files, we could read the files as such but it was not a great experience. Speaking of text files, the media tank does have support for srt, MicroDVD, sub, ssa, sub/idx sub-text files, which is really great. Besides all these things, there is also ISO, IFO navigation and AVCHD navigation support. Coming to the interesting part of networking, we can say that there are quite a few services that Popcorn Hour has put in the C-200 media tank. Of course, accessing the web is one of them. But with the amount of support for the web services, one would surely be exhausted. One thing that could be a hindrance is that novices could find the setup for networking a little hard. On the flip side, setting up the network would be easy for intermediary users. Gadgets, especially the ones that have a network factor, are hard to play with. But we are sure the makers of the media tank would address this in the next iteration.

Coming to what we can do after putting the tank in the network, well we can say the list is exhaustive. It goes without saying that videos on the web are supported but the sad part is no YouTube. But then they have put support for CNET, CNN and CBS shows amongst others. As for the audio services, you can access the BBC and iPodcasts as well as some other news channels. We told you there is support for images, well, that goes online too! Yes, the likes of Picasa, Photobucket and Flickr can be accessed on your TV. Other web technologies that have been incorporated are RSS Feeds (such as Yahoo Weather and news), Internet Radio such as Shoutcast and Radiobox and P2P television such as SayaTV. Some of these web apps have been done quite well, some like the Flickr are not. But app issues like these are usually addressed frequently.

Now coming to the hardware part, it has a 667MHz CPU with floating point coprocessor and the Sigma Designs SMP8643. As for the memory, Popcorn Hour has put 512MB DDR2 DRAM and 256MB NAND Flash in the C-200 NMT. Interestingly, they have put two USB 2.0 hosts in the front as well as back and even one internal one. The hind also has other ports. There are 2 SATAs, out of which one is occupied by the tray for the hard disk drive. Though there is a 3.5″ HDD tray, there is also internal mounting for 2.5″ HDD. On the front of the device, there is a LCD display along with a few buttons, which we can say are not that useful for using the interface. Yes, they have provided a backlit remote control, which becomes the main tool for interacting with the device. The menus are quite interactive and easy to go through. We tried out the NMT on not only a LCD TV but also a good ol’ CRT and we can say that it performed great on both the television sets.

Our Shout: The Popcorn Hour C-200 Networked Media Tank gets 8 on 10. It comes with a price tag of USD 300, which seems a little high but if you are looking out for a solution to watch all your multimedia content on your television, then the media tank is for you.