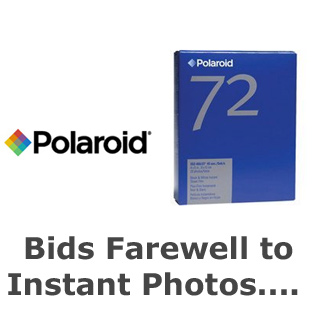 Remember the time when Polaroid film cameras were all the rage. You’d see excited people pulling a picture out of their cameras to see the image slowly but almost magically appear before their eyes. Labeled as erstwhile technology now that we have digital cameras easily available, the Polaroid instant film has surely become a thing of the past. After years of decline, the Polaroid company has announced that it is closing its last two film manufacturing plants.

Till date, Polaroid’s manufacturing facilities in Massachusetts make large-format film for commercial photography use, color and black-and-white peel-apart films for 3.5×4.25, and 8×10 formats as well as a limited number of films for Spectra cameras.

It is known that both of the plants in Massachusetts will be shutting down. Polaroid’s Mexico- and Netherlands-based plants will also shut down sometime later this year.

Polaroid introduced its instant camera way back in 1948. With its finely machines stainless steel body and black bellow, the Polaroid Land Camera looked far from modern. And, as you would remember, its instant film also came in roll form.

However, Polaroid had stopped the production of these cameras over a year ago without much ado. The company is now expecting to focus on digital photography equipment, including compact digital cameras and flat panel TVs.