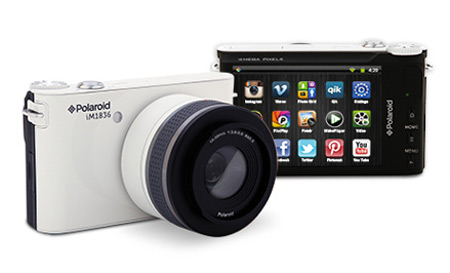 The price for the Polaroid iM1836 has been revealed and the Android camera comes puffing out it chest with a world first tag. Yes, like the Samsung Galaxy Camera before it, the device comes with the Google-certified platform, but the title of ‘first and only’ is bagged courtesy of its compact form factor and its interchangeable-lens technology.

The iM1836 Android camera is manufactured by an authorized licensee, Sakar International, and will feature Jelly Bean (OS version 4.1) as the operating platform. It has an 18MP sensor and a 3.5-inch LCD panel with capacitive touch. The camera comes with a 10-30mm optical zoom lens and is compatible with all Micro Four Thirds system lenses, which can be attached using the accompanying adaptor. It is also capable of delivering high quality images as well as 1080p HD video.

Furthermore, the combination of the interchangeable lens system and the simple Android interface, the company says, affords results of professional quality without the towering costs associated with high-end systems. A few interesting features of the camera include a pop-up flash, auto blink detection and automatic face exposure. It is even capable of taking panoramic shots when coupled with compatible high-end hardware.

Recently, at the 2013 CES, the company jumped into the ever-expanding tablet space unveiling a 7-inch slab, which hasn’t yet received an official name. Months prior, in June 2012, the company took us all back to the heydays with the Z2300, a digital camera which is capable of printing out instant photos just like the Polaroid cameras of old.

In terms of social connectedness, the camera in question comes with built-in ‘peer-to-peer’ Wi-Fi, which, along with the company’s photo sharing apps, makes it simple to upload pictures to social platforms including Facebook, Twitter, YouTube and Flickr. On top of that, there is in-built Bluetooth for an added social dimension when Wi-Fi can’t be used. Plus, HDMI output makes it possible to display images and video onto a larger screen.

The Polaroid iM1836 is scheduled for a Q1 2013 release onto store shelves tagging along an MSRP of $399. Now that is a relatively meager cost offering, considering that Samsung’s Android camera sells for about $550. Anyone who wants a taste of Jelly Bean mixed in with their photography experience will soon have options.