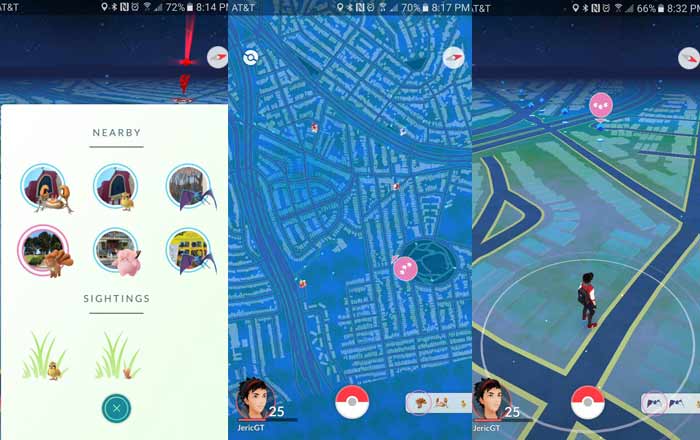 Pokemon Go is back in the news again with a brand new update which promises to resolve a number of issues that have been plaguing the app and creating hordes of angry users. The upgrade bumps up the version number to 1.3.0 for iOS and 0.33.0 for Android.

To recall, Pokemon Go creator Niantic had gotten rid of the Nearby feature last week while promising to improve upon it. The original system was widely regarded as confusing and ineffective, displaying Pokemon which had long since ceased to exist and failing to actually help people find Pokemon.

Niantic is now testing a variation of the feature with a small set of users. The new window contains two sections namely Nearby and Sightings. The former now shows Pokemon inside a ring which contains a picture of the Pokestop they are nearest to.

Tapping on one of them triggers the map to automatically zoom out to an overhead view and show the user which Pokestop they should be walking towards. The new Sightings tool displays Pokemon next to small tufts of grass, indicating that they’re in the wild in the general vicinity and not near a Pokestop.

Sightings doesn’t do anything when tapped as of now, so players will just have to wander around a bit before they can find the elusive Pokemon. Niantic has also improved its refresh rate system so despawned Pokemon actually disappear from the screen instead of hanging around until something else replaces it.

Other major changes in Pokemon Go include a new dialog which asks trainers to confirm that they aren’t driving while playing and the ability to change a nickname once. The upgrade also brings back and fixes issues with battery saver mode. It even solves a bug which prevented Nice, Great and Excellent Poke Ball throws from getting the appropriate experience bonus.

You can download the updated Pokemon Go via the App Store or Play Store.