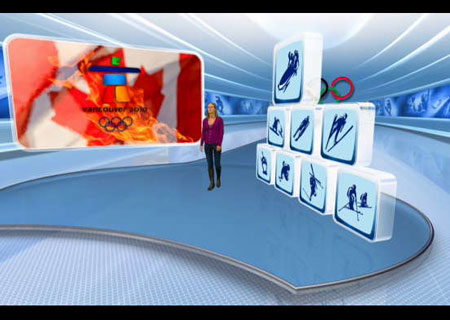 HD was the name of the game for most technological innovations all through last year. Hardly into the new year and 3D technology already seems to making some noise. Here’s and interesting amalgamation of them both. Plazamedia recently announced to have collaborated with Vizrt to exhibit Germany’s first real-time 3D stereoscopic HD virtual studio.

Thanks to the distinct partnership, Plazamedia made the most of its Open House that offers a sneak peek into the exciting developments. Plazamedia promoted its new HD virtual studio and HD master control room powered by Virzt technology. Yes, Germany’s debut 3D HD virtual studio was unveiled.

“We knew that Plazamedia planned to demonstrate its new real-time HD virtual studio. So we thought, why not take it one step further and create all the scenes in 3D?” shared Gerhard Lang, Chief Engineering Officer, Vizrt.

Virzt’s real-time renderers took maximum advantage of stereoscopic images instead of seeing the regular flat TV picture. This allowed creation of an illusion of depth. With the help of special 3D glasses, users could view moving 3D content on a typical TV screen.

Normally 3D demos require special stereo cameras. However the installation was done without it. The on-camera talent was ensured to remain appropriately situated within the 3D scene thanks to Virzt’s stereoscopic rendering.

Vizrt’s Gerhard Lang added, “This is definitely not a one-off. Some of Vizrt’s customers such as ESPN, NFL and BSkyB have already been on air with Stereo 3D content, and we see this as a future growth market for Vizrt. Broadcasters just require proof that this technology is ready for prime time. With Plazamedia’s HD 3D virtual studio, we’ve demonstrated that 3D production is indeed a valid option.”

The HD virtual studio by Plazamedia is based on two Vizrt products. The first one is the Viz Virtual Studio while the second one is the Viz Engine real-time rendering engine. With both systems having the ability to create real-time graphics in SD and HD formats, users can look forward to an enhanced experience.

At the Open House early last month, a public premiere for the new setup was held.