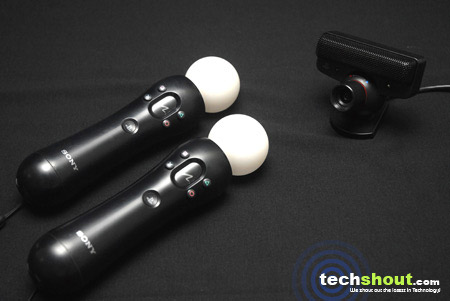 The PlayStation Move motion and navigation controllers are a pair of cool gadgets which you can literally bring into play. Until late last year, Nintendo Wii was the only source satiating our dreamy eyed fancies for a futuristic life where things fall into place with a single gesture. By the time it was the end of the year’s third financial quarter, Sony stepped into the realm with the PlayStation Move for PS3 followed by Microsoft and its Kinect. While the Wii requires gamers to swing the single Wii Remote and the Kinect transforms ‘you’ into the controller, the Move unleashes the path towards augmented reality with two devices. We’ve set out to review this PlayStation Move Motion Controller to see just how successful it is at translating life-like simulations into a virtual reality.

Like the Wii Remote, Sony’s creation is a key to the world which encapsulates a virtual life so real that it could blur your senses to tell the two apart. As the company publicized through its multifarious campaigns, this controller does indeed look like a wand from a wonderland with an orb reclining at the crest. Boasting of its slender, curvaceous sides and ballooning edges, the wand (not the orb) has been draped in classy black attire. Infused with conventional controls which you’ll find on the DualShock 3 as well, it flaunts the four small action buttons on the front panel. These keys encircle the PlayStation Move switch while a few inches below this constellation is the PlayStation button. The left and right sides of the handy controller sport the Select and Start keys, respectively. Further, it has also been presented with a wrist strap, USB and extension ports on the tail. Nevertheless, the striking resemblance between the Wii Remote and this device lies at the rear where the former’s ‘B’ button has been replaced by a ‘T’ key. This inclusion is of great help for browsing and selecting content on the XMB. 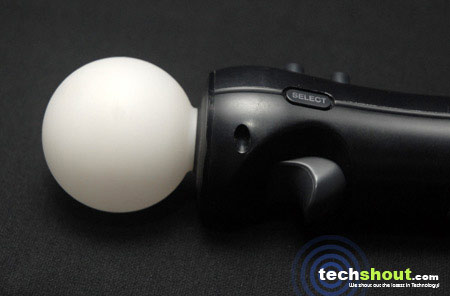 Now here’s how the Move works. As you turn on the system, the screen pops out a message pertaining to calibration. You’ll need to point the motion controller at the PS Eye camera and press the Move button until the orb glows with a pink, purple, blue or red hue. Thank the embedded RGB LEDs for the same as they emanate bright hues, breathing life into the rubber ball. It will further require you to follow a routine every time the device is attuned, almost taking away the need to visit a gym. You stretch your arms several times before the system decides that it is time to wind up the session. The controller is extremely easy to hold and if not safely strapped in, we could actually fling one out of the window. There’s also a constant reminder for turning the PS Eye camera into the wide angle view for efficient tracking. It blinks blue when the controller has been pointed at it. If the controller moves out of the frame, it flashes a red hue for indicating the same.

Couple it with either the DualShock 3 or navigation controller to kick off action titles that actually need you to move around in-game. The fact that the Move can be used with the former instilled a sense of relief as it would not need to rot on the shelf while employing the latest members of the Sony PS3 family. We decided to employ it through four particular titles including The Shoot and The Fight: Lights Out designed specifically for the PS3 along with Killzone 3 and The Sly Trilogy. The Fight: Lights Out is one of the first exclusive games crafted for the PlayStation Move. It lets gamers fight in the urban wilderness of underground locations while teaching them the tricks of the trade with Duke voiced by Danny Trejo. As we trained in the master’s gym for sailing through fights in The Underpass, Murder Alley, The Chapel, Dmitri’s and more, the Move stunned us with its ability of translating movements with surreal manifestation. 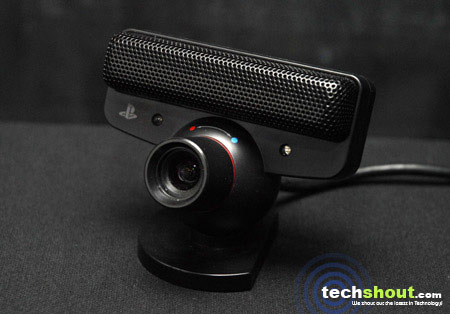 If you’ve played Killzone 3 without the Move previously, going back to the battlefield wielding this weapon could represent a dramatically vivid picture. At first, it is difficult to manage the speed at which the PlayStation Move Motion Controller flaunts its presence but as we gained control, the road of trepidation disappeared along the way. Using it in this arena requires expertise and patience to hold positions, especially if you’ve not picked the PlayStation sharp shooter accessory yet. Furthermore, the controller’s sensitivity to even minute actions is something you can’t help but notice. The other games namely The Shoot and The Sly Trilogy are like those numerous Wii games where a simple swing and some attention is enough for surpassing hurdles. The integrated features and design of these games however don’t really help the Move show its brilliance. The Sly Trilogy has a set of flying games which support the device while The Shoot is a movie set depicting various situations such as the Wild West, Alien Cyborg invasion and more. In the latter, players can step into an aspiring actor’s shoes to defeat enemies, kill the goons and save the girls without injuring yourself to impress the director. If he is happy with the performance, you earn a role in the filmmaker’s next venture.

We faced a bit of an issue while playing with the Move and the DualShock 3 controller, instead of the Navigation device. Since it was the first time we were holding the latter in a vertical position, our fingers and palm pressed upon unwanted buttons generating unwanted diversion through gameplay. Another unimpressive quality of the Move is its poor battery life which required us to constantly refuel the device. Using the Move made us note down a few points about the motion detection technology. We particularly realized this through our training and contests scheduled through dark alleys in The Fight: Lights Out. Even if we didn’t end up with bruises, the sheer attempt to box the opponent to a pulp and the eventual actions left us with strained arms. This brought us to the point which has been neatly tucked under the garb of this augmented reality – the Move doesn’t trace your mind but bodily movements. So, you need to perform actions carefully and specifically as if playing in a real boxing ring or a genuine battlefield.

The agile and carefully designed construction of the PlayStation Move Motion Controller is extremely handy.

Sony has ensured that the precision delivered by the device stands tall with its tech reputation, accurately replicating gamers’ movements.

The poor battery life is a big letdown as you’ll need to charge the device at frequent intervals for quenching your gaming thirst.

Pairing the Move with a DualShock 3 device may not yield optimum experience, forcing you to get the navigation controller home as well.

Unlike the Kinect, the Move will be put under the scanner alongside the Wii Remote controller. However, gamers who have managed to cast a spell with this wand will agree that it is indeed a masterpiece. Sony seems to have toiled extremely hard to create it and the results are indeed fruitful. Nevertheless, the device’s weak battery life is one of its grave nemeses which could continue haunting it until the manufacturer delivers a concrete solution. The PlayStation Move Motion Controller is available for Rs. 2,499. The starter pack comprising the device, PlayStation Eye camera and a starter disc has been priced at Rs. 3,650. The price seems just for what it has to offer. Finally, this innovation from Sony’s end has earned itself a score of 8.5 out of 10 on our rating card.