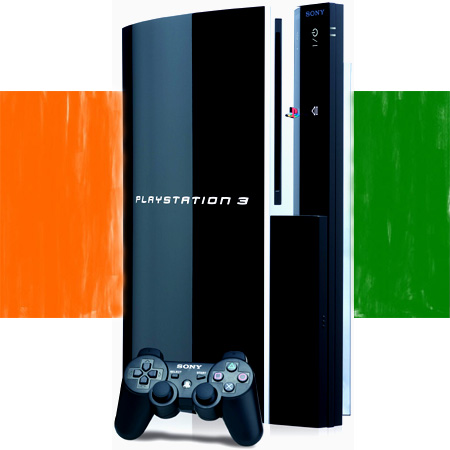 India has seen a flurry of gaming lately. September 2006, saw the release of the Microsoft Xbox 360 gaming console. After which a series of big games were launched in the country too. Big gaming competitions such as WCG India, Reliance Gamebox have only added as an icing on the cake, encouraging the gamers further. And the gaming story in India just doesn’t end there.

Sony India has just launched the highly-anticipated PlayStation 3 next-gen console in India. Apart from the PS3 launch, Sony India also announced the availability of the PS3 hardware, a software line up of over 12 first- and third-party titles will be available across the country. The event took place at the well-known ‘InterContinental The Grand’ hotel at Connaught Place, Delhi.

The heart of PS3 beats through the Cell Broadband Engine, one of the most-advanced computer processors in the world, that allows massive floating point calculation, and Blu-ray Disc (BD) drive, putting forth a true High Definition (1080p) next-generation gaming and movie experience in the home, along with up to 50 GB of data capacity for video game developers to store content -five times the capacity of a DVD. PS3 also features a 60-GB hard disk drive (HDD), built in Wi-Fi adapter and multiple memory card slots.

Speaking at the launch, Masaru Tamagawa, Managing Director, Sony India Pvt. Ltd. said, “With today’s launch of PS3, we are officially ushering in a new era in true next-generation entertainment across India.” Tamagawa added, “The innovative PS3 system features powerful technologies and capabilities that have never been brought together in one system, including the Cell Broadband Engine, BD drive, HDD and online connectivity as standard features. The results are breathtaking new interactive worlds to explore, eye-popping multimedia functionality, and a fully integrated online experience – all in high-definition clarity. The value we are providing consumers with PS3 is beyond compare.”

The PS3 boasts of a novel, new SIXAXIS wireless controller allows gamers to physically turn, twist, and bank their controllers to command the on-screen action. PS3 also comes equipped with an HDMI output for the best connection possible to high-definition displays, supporting Full-HD resolution up to 1080p for both games and movies. Integrated network capability means that all PS3 owners can enjoy online game play and services, such as Web browsing through the PlayStation Network.

“We’re thrilled that we are able to bring PS3 to gaming fans in India after the successful launches in Japan, North America and Europe” said Tim Stokes, Sales & Marketing Director, Sony Computer Entertainment Europe. “With the incredible technology and value packed into PS3, we have seen a rapid adoption of the system around the world, and we expect also see similar results in the booming Indian market.”

“We are delighted to support the launch of the PlayStation 3 in India with a strong line-up of EA games that are latest and most powerful in terms of gameplay. We will continue to show our commitment to the interactive gaming market in India by launching more PlayStation 3 games during the rest of the year,” says Ajay Khanna, General Manager, Electronic Arts, India.

The PlayStation 3 60 GB model is priced at Rs. 39,990/- in the Indian market and is available at authorized retail stores across the country. PS3 peripherals available include additional SIXAXIS wireless controllers available at Rs 2,990/- as well as a Blu-ray Remote Control and HDMI Cable both sold at Rs. 1.990/-. Only the 60 GB model of the PS3 console is available in India. PS3 has to compete with Microsoft’s Xbox 360 in India which is priced at almost half the price of the PS3 console at Rs. 23,000/- for Premium version and Rs. 19,000/- for the core version. Sony might have had a better chance going against the Xbox 360 in India if they would have released the 20 GB PS3 console as its price would have been on par with the Xbox 360.

Sony might be banking on its huge PS2 user base in India to upgrade to the PS3. PS2 presently costs around Rs.8,000/- in India and the price is expected to go further down with the launch of the PS3.

Only time will tell as to who will emerge victorious. But if Nintendo ever decides to launch it’s Wii console in India it will be a whole new ball game altogether.