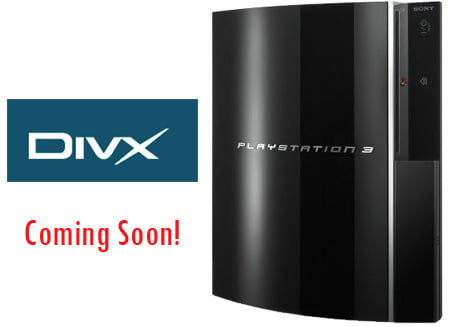 Today it was announced that the ubiquitous and much-used DivX video format technology will soon be integrated into PlayStation 3 consoles. DivX Inc. is currently working to certify the PS3 and deliver superior digital media technology to consumers in the near future.

Already, there are a number of devices that use the DivX technology such as DVD players. Now, Sony’s next-generation console will be the latest product to support DivX playback.

In fact, products that bear the DivX certified logo have undergone a rigorous testing program to ensure a high-quality DivX media experience that includes reliable playback and excellent visual quality.

According to Kevin Hell, CEO of DivX, Inc, “We are excited to work with Sony Computer Entertainment to bring DivX to PS3. Our technology will expand the multimedia functionality of PS3 by enabling users to enjoy access to the broad library of content in the DivX digital media format.”

Current PS3 owners will be able to add DivX functionality to their consoles via a separate software update that will be released in the near future. As for PS3 game developers, they will be able to make use of DivX’s technology by updating the system software of PS3’s Software Development Kit to version 2.00 which was released by Sony on November 2, 2007.