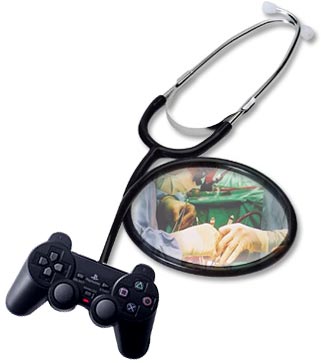 If your dad wants you to become the world’s best surgeon, but you on the other hand insist on being glued to your video game…then here’s a reason that will surely relax your dad.

A research conducted at the Beth Israel medical centre in New York has revealed that there is a direct link between skill at video gaming and skill at keyhole, or laparoscopic, surgery. Young surgeons who spent at least three hours a week playing video games in the past made 37% fewer errors, were 27% faster, and scored 42% better overall than surgeons who had never played a video game at all.

Laparoscopy and related surgeries involve manipulating instruments through a small incision or body opening where the surgeon’s movements are guided by watching a television screen.

The research led by Dr James C Rosser from the Department of Surgery, Beth Israel Medical Center, and a team of colleagues tested 33 surgeons including 21 residents with an average of three years’ experience, and 12 more senior with almost 13 years, with various levels of gaming experience. The results were nothing short of astounding.

Each of the junior doctors were questioned on their video-game playing habits and then assessed as they took part in a one-and-a-half day course that scores surgeons on time and errors during simulated surgery drills. Gaming skills were also assessed as they played three video games for 25 minutes.

Of those taking part, 42% had never played a video game but 30% had played almost every day at one time.

There was a direct correlation between playing video games and skill at laparoscopic surgery, with those who scored highest on the video games performing the best on the simulated surgical course.

Through this research, its authors suggest that video games may be a practical teaching tool to help train surgeons. However the Royal College of Surgeons said research, conducted by Professor Ara Darzi, from the surgical unit at St Mary’s Hospital, London, showed no correlation between video games and performance in surgery.

Infact, a survey conducted in 2004 by Iowa State University psychology professor Douglas Gentile, one of the study’s authors, found that 94 percent of U.S. adolescents play video games for an average of nine hours a week. Game-playing has been linked to aggressiveness, poor school grades and can become a substitute for exercise.