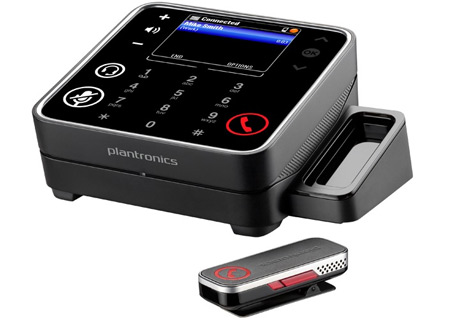 Those on the lookout for a new speakerphone ought to lend an ear to this latest announcement from Plantronics. That’s because their Calisto 800 series of multi-device speakerphones is apparently built to simplify the process of communication for the sort of distributed workforces we’re so familiar with these days. The Calisto 820, Calisto 825 and Calisto 830 are part of Plantronics’ speakerphone fold.

The Calisto members are capable of streamlining audio communications across PC-based softphones, handsets and even those traditional landlines. The Calisto 825 is described as a two-way speakerphone for PC and mobile phones. It embeds the PA50 wireless lapel microphone, though users can also swap it for a Bluetooth or corded headset. An easily comprehensible visual display as well as echo and noise cancellation technology are part of the whole set up.

Microsoft Office Communicator and Lync optimization, full duplex wideband audio, noise cancellation, wireless connectivity with Bluetooth headsets and 3.5mm jacks are the options which run common in the Calisto 800 series. The Calisto 820 is a two-way speakerphone for PC and mobile phones, while the Calisto 830 is a three-way speakerphone for PC, handsets and analog landlines. The last mentioned comes with a USB cable, AC adapter and RJ11 cable.

Available through Plantronics or authorized retailers, the Calisto 820, Calisto 825 and Calisto 830 cost $179.95, $259.95 and $199.95, respectively. Variants which work with softphones like those from Avaya, IBM, Cisco and Skype will be out in spring 2011. Plantronics is also holding out the PA50 wireless Bluetooth lapel microphone for the Calisto 820 and 830. It’s $79.95 for the accessory along with the charging base.