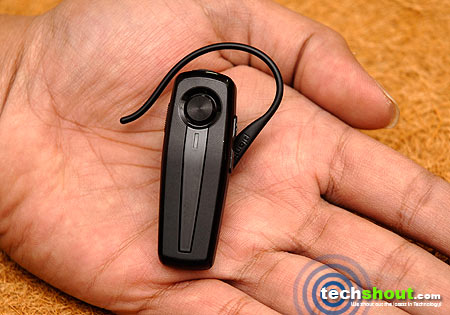 With the sudden surge of mobile phones seen in the past few years, mobile phone accessories can easily claim to be one of the most in-demand things today. Plantronics’ Explorer portfolio for that matter has been known to belt out affordable products in the headset terrain. In December last year, Plantronics released the Explorer 210 Bluetooth headset which we managed to use for a few days. Here’s a mini review of the headset.

The specifications claimed by Plantronics include a rechargeable lithium ion battery life that offers up to 8 hours of talk time and up to 8 days of standby time. Accompanied by a 100-240V AC charger, it tips the scale at just 11.5gms. Supporting headset and handsfree profiles, the headset encompasses Bluetooth version 2.0 and is backed by a 1 year warranty.

When we unboxed the headset we found a very simple bundle. We set our eyes upon the encased device that looked really sleek and fashionable. The standard sized headset revealed a convenient switch for on/off while a button on the opposite edge for adjusting the volume was also present. The on/off switch we think was a good inclusion mainly because it makes for a practical solution to save on battery life. A large circular button on the top face lets you conveniently answer or hang up on calls. Just below it is an LED light that blinks blue when the headset is on and turns red when its battery is low. The light fluctuates when the headset is being charged.

Just one glance of the headset is enough to notice the neat slim earloop and a contoured eartip, both of which are designed to offer added comfort. Doing just that, when we wore the headset for longer durations, the earloop ensured us an ergonomic fit while the contoured tip let us wear the headset without being hurt. Light and easy on the ears, the headset doesn’t throw its weight around. Besides, the headset’s earloop is flexible and detachable allowing it to be turned around for wearing on any ear. Other than the size and weight that seems just right for comfortable wearing, the flexibility of the earloop adds to its durability as well.

Moving on the performance, this is one department where the headset didn’t really manage to impress us. We first tried pairing it to our Nokia E63 phone. After many failed attempts, we tried connecting it to a lower configuration Nokia handset namely the Nokia 3310c which we were surprisingly connected to in a jiffy. Within the confined office space, we were not only offered great call quality but also a good music listening experience.

Though once out in environments that include disturbances, the voice quality begins to dwindle. With poor voice clarity, the phone’s mic too seemed to be low on performance. The battery, however, seemed to be quite the saving grace. On a complete charge, the headset proffered around four days of juice. With the company claiming an 8 hour battery life, we must say we weren’t disappointed on that front too considering we got around 7 hours 25 minutes of talktime.

The setup is simple while you can also save on much needed battery power with the dedicated on/off button.

The flexible earloop further makes it hassle free to tag along the headset without really bothering about damaging it.

For a headset in its price range, the Explorer 210 is super comfortable.

While we would have obviously preferred better voice clarity and enhanced connectivity, Plantronics could also have thrown in a couple of earbud options. With the headset’s earbud designed to go right into the ear canal, a misfit could be really troublesome.

In addition to this, the included earbud also attracts a lot of dust. So something replaceable would have been really nice.

For performance hungry users, the headset may not be up to the mark. However a price tag of Rs 1,399 should catch the fantasy of enthusiasts on the look for an affordable Bluetooth headset that’s stylish as well. With not many headsets available in this price bracket, you might just want to ignore the capability part. At least it can claim to be much better than most basic headsets offered in a much higher price range. We’d give the headset a decent 7.5 out of 10.